Being customers of supermarkets and shopping malls, it is hard for us to imagine the importance of the local grain harvest until recently, because today, airplanes, trucks and fast ships supply the consumers with foodstuffs inexpensively.

In the Horrea Epagathiana in Ostia not far away from Rome it was possible to store great supplies of grain. Source: Patrick Denker / Wikipedia.

In antiquity, that was different. Only a fraction of the foods we today are used to was available, and the basis of sustenance were grain and oil. If a harvest failed in some area, huge price rises were inevitable because it could only be compensated by transporting grain at heavy cost from a few areas were a surplus was produced. Someone living in Rome didn’t face such a problem since there, the emperor took care of a sufficient supply – it was in his own interest to keep the people calm. Anyone living in the provinces, in contrast, was only too familiar with famine and rising prices.

Tarsus was confronted with such a threat. In A. D. 215, a grain shortage was imminent but not due to hail or a sloppy summer but the march through of an enormous army under Domitian. That army needed to be supplied: grain was seized, of course at cheap prices fixed by the state to the effect that the market was swept. The citizens of Tarsus could only buy the remaining grain on the free market at very high prices which, as always, made the poor fall by the wayside.
The further events are narrated by a fairy tale, re-interpreted in the 6th cent. under Christian influence whose plot date to the 3rd cent. A. D. (there is a distinct possibility that the story relates not to the happenings under Caracalla but to a second grain distribution to the citizens of Tarsus on the initiative of Severus Alexander on his visit to the city):

Apollonius of Tyre had arrived at Tarsus only to be told that his future father-in-law refused to give him his daughter’s hand in marriage and had put a bounty of 50 talents for Apollonius’ head.
“My lord,” answered Stranguilio, “our city is extremely poor, and cannot sustain your attendants, in consequence of a grievous famine which has wasted the land. Our citizens are hopeless and helpless; and death, with all its accompanying horrors, is before our eyes.” “Give thanks to God,” replied Apollonius, “who hath driven me a fugitive to your shores. If you will conceal my flight, I will present to you a hundred thousand measures of corn.” Full of joy, Stranguilio prostrated himself at the feet of the prince, and exclaimed, “My lord, if you will assist our starving city we will not only conceal your flight, but, if necessary, unsheath our swords in your defence.” Apollonius, therefore, hastened into the forum, and ascending the tribunal, spoke thus to the assembled population: “Men of Tharsus, understanding that an afflicting dearth of provisions troubles you, I, Apollonius, proffer aid. I believe that you will not forget the benefit I render you, but conceal my flight from those who unjustly pursue me. Ye know what the malice of Antiochus aims at, and by what providence I am brought hither to relieve you in this terrible emergency. I present to you a hundred thousand measures of corn at the price I gave for it in my own country — that is, at eight pieces for each measure.” The citizens, delighted at what they heard, gave thanks to God, and immediately prepared the corn for use. But Apollonius, not forgetting the dignity of a king in the traffic of a merchant, returned the purchase-money to the state; and the people, struck with wonder at this unexpected instance of generosity, erected in the forum a chariot drawn by four horses, running side by side. In the car was a statue, representing Apollonius with his right hand rubbing the corn from the ear. His left foot trampled upon it; and on the pediment they placed the following inscription: — “Apollonius, Prince of Tyre, by a gift to the city of Tarsus, preserved its inhabitants from a cruel death.” (The History of Apollonius King of Tyre, Gesta Romanorum, translated by Ch. Swan, revised and corrected by W. Hooper, London 1905).

When the story is divested of its fairy tale-like trimming, its plot becomes evident; the citizens of Tarsus convinced Caracalla that the city wasn’t able to sustain him and his army. That prompted the emperor to have 100,000 modii of grain transported by ship to the city which he sold for a symbolic price of 2 sestertii to the citizens.
Actually, we have a first-hand testimony of this distribution, a tessera with the legend TAPCOC and a grain carrier on its obverse. The large-scale grain distribution of course took the pressure off the market since from that moment onwards the demand for grain on the free market had decreased. The purchase price was provided by the emperor for the city. As a reward, the citizens of Tarsus erected a statue in his honor. The question remaining: how did the citizens of Tarsus make the emperor support their city, of all, with grain? For all we know, for a provincial city that was a rather unusual action. 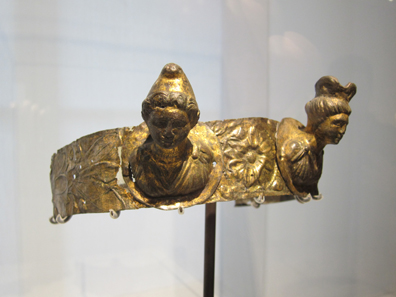 The coin’s obverse provides a small hint. Emperor Caracalla doesn’t wear the usual cuirass, mantle and laurel, but his head is decorated with a thick wreath and he is clad in a kind of cloak. That type of garment is familiar from other coins. The wreath, that is sometimes shown on the reverses of coins from Tarsus as the only feature, is the wreath of a demiourgos, the badge of office of the highest of Tarsus’ officials. Thus, Caracalla is shown in the official attire of the ‘mayor’ of Tarsus. This was a masterstroke of the citizens of Tarsus, to talk the emperor into accepting the office as the highest official. As a result, Caracalla felt responsible for the city’s wellbeing and rescued it from imminent famine by having brought enough grain from Egypt, his imperial province, to relieve the direst need. And that was the very thing the citizens of Tarsus had depicted on their coins, to show other cities how much the emperor cherished Tarsus, and probably to remind themselves again and again of their successful political masterstroke.