In its Fall Auction from September 25 to 29, 2017, Künker will auction a major collection of coins and medals related to the Reformation. The material includes a magnificent medal that Georg Wilhelm and Andreas Vestner created by order of Karl Wilhelm Friedrich of Brandenburg-Ansbach. Its reverse features a scene we know from a copper engraving by Karl Remshard from the ‘Kurfürstenbibel’ (‘electoral bible’). It was produced by the Nuremberg-based printer Andreas Endters who therewith published not only contents of the Old and the New Testament, but also texts and illustrations related to Protestant history.

Karl Wilhelm Friedrich (1729-1757). Silver medal 1730 by Georg Wilhelm and Andreas Vestner. Estimate: 7,500 euros. Aus Auktion Künker 297 (27. September 2017), Nr. 3276. – The reverse inscription translates as: Presented to the Emperor in Augsburg, the most holy faith has begun to shine again and will shine for eternity, shining in its own light.

The technically sophisticated reverse die was made by 23-year-old medalist Andreas Vestner (1707-1754) in Nuremberg, who had started to work in his father’s business in 1726. His father Georg Wilhelm Vestner (1677-1740) was responsible for the portraits on the obverse which the Margrave probably deemed more important. 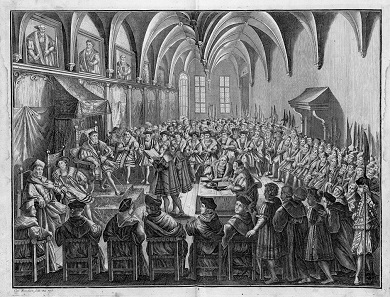 The reverse shows the Saxon Chancellor Dr. Christian Beyer. He reads out the German version of the Confessio Augustana to Emperor Charles V who sits on an elevated podium. Next to Beyer stands his colleague Gregor Brück, who is to deliver the Latin text to the Emperor. Next to Charles V sits his brother Ferdinand on his right. 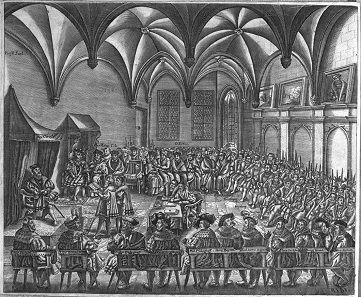 While a contemporary engraving gives a meticulous description of the places of the most important spiritual and secular members of the Imperial Diet – the spiritual electors on the right, the secular ones on the left of the Emperor – Remshard, and subsequently Vestner shows the Estates as an exchangeable assemblage of people. 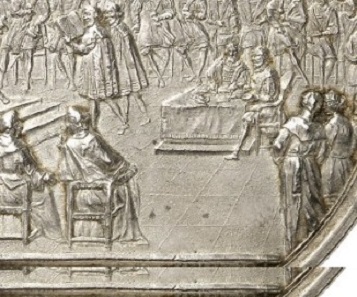 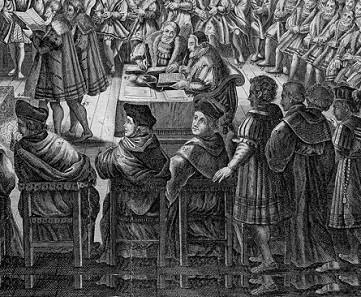 Details from silver medal lot no. 3276 and the copper engraving by Karl Remshard.

At the center of the representation there is a table, where two scribers record what is happening. To give a better view of this table, Vestner reduces the crowd: Two seated and two standing nobles are omitted. 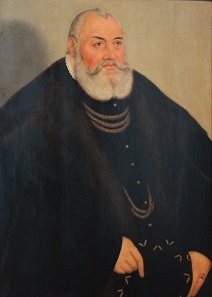 Georg ‘the Pious’, Margrave of Brandenburg-Ansbach. Painting by Lucas Cranach the Younger. Today in the Grunewald Hunting Lodge.

The obverse shows Georg ‘the Pious’ of Brandenburg-Ansbach opposite the commissioner. He was renowned for his uncompromising support of the new religion. He signed the Confessio Augustana and introduced Lutheranism as a binding faith in his empire.
This is what Karl Wilhelm Friedrich draws upon. The inscription under the busts of the two rulers reads (in translation): The former restored the Ansbach citizens’ faith in 1530, the latter retains it in 1730. Linked by piety and blood, claims the Latin motto in the coin’s exergue. 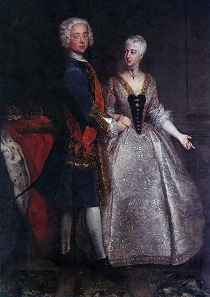 Why, then, did Karl Wilhelm Friedrich of Brandenburg, who entered history as the ‘Wild Margrave’ because of his hunting passion, make such an effort to display his piety?
This had practical reasons. The 18-year-old was broke and expected his father-in-law in 1730, from whom he wanted help in his liquidity needs.
His father-in-law was none other than the Prussian King Frederick William I, known not only for his passion for the ‘Lange Kerls’ (‘Potsdam Giants’) but also for his admiration of Pietism. Karl Wilhelm Friedrich probably used the 1730 anniversary of the Confessio Augustana to win the benevolence of the Prussian King through a meaningful medal. He presented himself as a deeply religious man, in order to appeal to the feelings of Frederick William. Being presented with specimens of these medals as a gift during the festivities held on the occasion of his visit, the King might have been the main target audience of the message the medal conveys.

However, Frederick William I had too much experience to take the numismatic lip-confession of his son-in-law seriously. He advised him to curb his lifestyle and granted him an accommodation loan – at 8% interest.

This was not how Karl Wilhelm Friedrich had planned things. There was nothing to be expected from the Prussian relatives. The marriage with Friederike was a disaster, too. As early as February 1732, Crown Prince Friedrich of Prussia wrote: “My Ansbach sister and her spouse hate each other like fire.”
Friederike retired to her castle in Unterschwaningen. Karl Wilhelm Friedrich went on hunting and, at the time of his death, left debts amassing to 2.3 million reichstalers.