On June 3, 1939, King Carol II of Romania commissioned the issue of six commemorative gold coins on the occasion of the 100th anniversary of Carol I, founder of the Romanian royal house, in his Edict No. 2301. The specimens were the first gold coins ever to be minted on the territory of the Kingdom of Romania. Though you should think that Carol II would have had other things on his mind at the time than commemorative coins…

Carol II and his son Michael inspecting the troops on May 10, 1939, the Romanian national holiday.

After all Romania was on the brink of a German invasion. The matter in question was oil. Germany urgently needed this resource for its great war. And Romania was sitting on huge oil occurrences. With that hand King Carol II could push his luck. He tried a clever double-cross. As late as November 1938 he personally travelled first to London, then to Germany to pledge loyalty to both Chamberlain and Hitler. Carol drove a hard bargain, forcing Germany to sign a trade agreement that promised Hitler oil, but too little and too expensive. 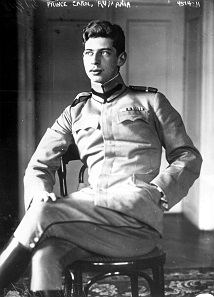 Just 10 years earlier no one would have trusted the carefree playboy prince with that kind of diplomatic skill. The playboy prince, that’s what the yellow press nicknamed Carol II. And with good reason. The Romanian Crown Prince was good for headline after headline: At age 24 he deserted. He left the French army shortly after the outbreak of World War I to marry a commoner. Not just his parents were shocked. Just when the outrage had subsided and the divorce been pronounced nine months later, a dream wedding with the beautiful Princess Helen of Greece and Denmark took place. Who was a bit too boring for the playboy prince. It didn’t take long until he was fooling around with commoners again until Helen had enough of it and got divorced in 1928. By that time Carol was already living with Magda Lupescu. She was the daughter of a Jewish apothecary, apparently above all known for her fondness of expensive French couture.
A playboy prince indeed, which is why it was suggested to Carol II that he abdicate the throne. Which he did, in favour of his four-year-old son. And in 1930 parliament replaced the now eight-year-old King Michael with a Carol who seemed to have come to his senses over the years. 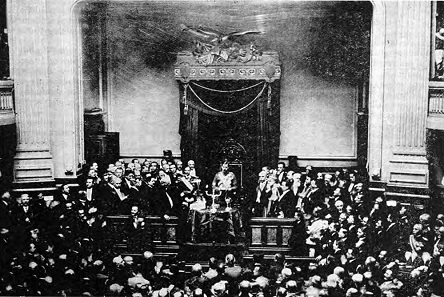 King Carol II takes the oath before the Romanian parliament on June 8, 1930.

And he didn’t even make such a bad king after all. His goal was to secure Romania’s political and economic independence. Not an easy thing to do in the 1930s.
Carol adopted a seesaw policy, playing Germany against France and Great Britain. Hungarian Transylvania, which had fallen to Romania in the treaty of Trianon, became hostage of the situation. The Hungarians were stalwart fascists and hoped for German support in this matter. Göring was willing to make Transylvania part of the deal, when, already in February 1939, he tried to go back on the trade agreement on oil that had only been signed in November 1938.

Romania, so the German proposal, was to nationalize its entire oil industry. The national oil company would be jointly controlled by Romania and Germany, with the addition that Romania was to sell its oil exclusively to Germany. Economically this would have made Romania dependent on Germany. That wasn’t in Carol’s interest but how could he decline without angering Germany?

What happened next made history as the Tilea Affair. Whether or not it was initiated by Carol II remains his secret. Romanian ambassador Viorel Tilea, anyhow, succeeded in convincing the British Prime Minister Chamberlain that the Germans were about to invade Romania any minute. Chamberlain took action. He offered a guarantee for Romania’s independence before parliament and got his French colleague Daladier to do the same for France. Carol immediately accepted the guarantee but refused to let the Allies take over the command of his troops. His idea must have still been to keep Romania out of the great war that was coming. 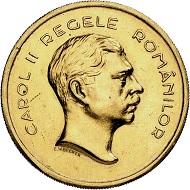 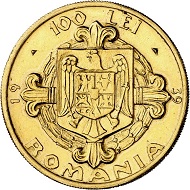 And in this troubled time Carol II issued the edict to celebrate the 100th anniversary of the dynasty’s founder by issuing six different gold coins. Both issues of this rare 100 lei coin are on offer in the upcoming Künker auction sale 298 on September 28, 2017. If you don’t know the occasion of the coins’ minting, you would never guess that they’re related to Carol I in any way. The obverse features Carol II with the inscription Carol II King of the Romanians. The reverse depicts the coat of arms of the Kingdom of Romania with a cross fleury. 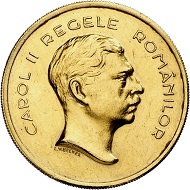 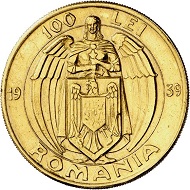 The second issue has just as little to do with Carol I, but is a bit more martial in design. On it Archangel Michael, victor over the powers of hell, protects the kingdom’s coat of arms. One interpretation of this iconography could be that Carol II liked to stage himself as God-sent ruler of Romania, thus laying claims to heavenly protection. 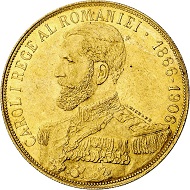 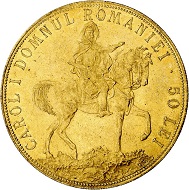 Only the gilded bronze coins “Galbenul” (= yellow ones) show a very faint resemblance to the gold coins that Carol I had commissioned in 1906 on the 40-year jubilee of his holding office. Carol II takes up Carol’s I pose of ruler with sceptre on horseback. 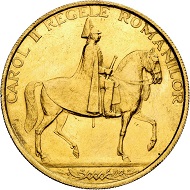 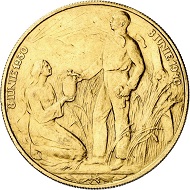 Carol II also adopted this depiction for the coins issued in June 1940 on which he celebrates his government’s 10 years in office. Though, strictly speaking, June 1940 wasn’t exactly an ideal time to be dealing with commemorative coins either. You have to ask yourself for what purpose and for which target audience these gold coins, nowadays extremely rare, were minted.
Perhaps Carol II was hoping to secure the support of the Romania’s political and economic upper class by distributing the splendid gold coins among them as presents. The occasion – the 100th anniversary of the dynasty’s founder, the 10-year jubilee of government in office – were interchangeable. Carol was simply vying for support of his persona and his seesaw policy, and staged himself as Romania’s only saviour.
This becomes especially obvious on the reverse of this 12 ducat coin from 1940. It shows the king as a simple soldier but at least as a member of the most renowned branch of service at the time, the air force. After a crash landing, which is said to have actually taken place in the forests of Transylvania, a simple peasant wife, established in Romanian folklore as Modura, hands him a jug of water. 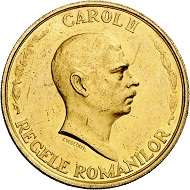 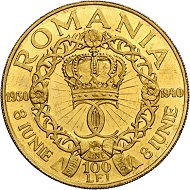 Even more obvious is the message of this 100 lei gold coin, whose reverse features the Romanian crown surrounded by a crown of thorns. Carol means to illustrate which tremendous sacrifices the king would be willing to make for his country. The depiction associates Carol at least loosely with the crucified Christ, a bold claim which he could not really substantiate.

Because on June 26, 1940, two weeks after his government’s jubilee, Soviet Union presented him with an ultimatum: Bessarabia and Bukovina in exchange for the integrity of the leftover Romanian territories. Carol had styled himself as a God-like ruler. Renouncing these two territories was out of the question. Therefore he recalled the British-French guarantees and asked for an alliance with Hitler from whom he expected more efficient help. He also signed a trade agreement that granted Germany access to the much needed Romanian oil on August 8, 1940.
But Hitler didn’t like Carol II. He’d read Carol’s correspondence with Germany’s enemies. So he forced Carol to comply with the demands of the Soviet Union and also return other territories which had belonged to Romania since World War I.

That was the straw that broke the camel’s back. Carol II had lost all authority in Romania. He resigned and went into exile. To his son Michael he left the almost impossible task of steering Romania through the turmoil of World War II.

To go to the Künker Fall Auctions of which these coins form part, please click here.

And this is the detailed CoinsWeekly auction preview.