An auction of Russian coins, orders and medals held by Baldwin’s, in association with Dmitry Markov Coins and Medals and M & M Numismatics, on Thursday 9th January realised US$5,364,428.

Struck to commemorate the 30th Birthday of Tsar Alexander II’s fourth son Grand Duke Vladimir, an 1876 25 Roubles topped The New York Sale, Auction XXXIII and was purchased for US$380,250. The proof-like gold 25 Roubles is one of only four large gold coin types issued by Imperial Russia. Of the four, the 25 Roubles coin is the rarest and most elusive, as only 100 pieces were struck.
Vladimir was president of the Academy of Arts and a famous Patron to many artists. His military career was tarnished after the Bloody Sunday massacre in 1905, when hundreds of unarmed protesters were killed outside the Winter Palace as they marched to present a petition to Tsar Nicholas II. Although he was away from the city at the time and claimed no responsibility, Vladimir’s reputation never recovered.
This rare commemorative issue was from the collection of Åke Lindén, a man of international stature who’s aim was to own an example of every type coin, from every county in the world, since 1850. Born in Stockholm, his passion for coin collecting was inspired by his father who travelled widely all over the world, bringing back different coins from each country he visited. The New York Sale included the first coins from his collection to be offered and Baldwin’s are extremely proud to be presenting his entire collection of world coins as part of their 2014 auction calendar in London and Hong Kong. 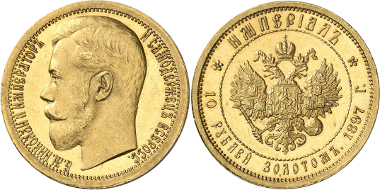 An important piece of Russian financial history was included in the Lindén Collection. An 1876 Imperial 10 Roubles attracted some competitive bidding and was purchased for US$351,000. The coin was produced as part of a set of major currency reforms, which were designed by famous Russian Finance Minister Sergei Witte to stabilise and place the Russian Rouble on the gold standard.

Also included in the reforms, and from the Lindén Collection, was an 1895 Half Imperial 5 Roubles which sold for US$234,000 (Lot 1314). Witte issued the series of special dual denomination gold coins to huge success, providing stability and stimulating economic development.

Sold as part of the famous 1981 Schweizerischer Bankverein auction a gold medal produced in 1913, on the 300th Anniversary of the Romanov Dynasty, was purchased in this sale for US$315,900. The medal brought the highest price of any Russian medal or coin in the Schweizerischer Bankverein auction. It is one of only a few known to exist in gold.
The house of Romanov was the second and last Imperial dynasty to rule over Russia, which ended with the forced abdication of Tsar Nicholas II and the start of the Russian Revolution. The medal depicts the conjoined busts of Nicholas II and Michael Feodorovich, the first Russian Tsar of the dynasty. 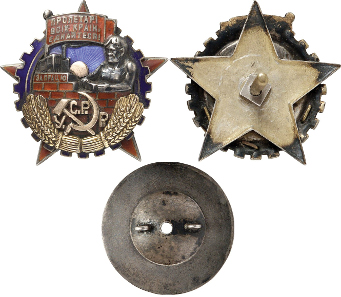 Other valuable pieces of Russian history, this time from the Soviet Union, included a unique 1925 Prototype Order of the Red Banner of Labour of Ukraine, type 2 which sold for US$351,000 It was established by the Fifth All-Ukrainian Congress of Soviets in 1921 as an award to honour great deeds and service to the state and to society, however, the order was never commissioned.

The auction was held alongside The New York Sale XXXII of Ancient Greek, Roman, Byzantine and World Coins at the Waldorf Astoria Hotel during the 42nd New York International Numismatic Convention.

For full results from the auction please visit the Baldwin’s website.