A collection of Gold Sovereigns that spans 525 years, 15 Monarchs and seven mints, will be offered for sale by London based auctioneers, A. H. Baldwin & Sons Ltd, on Thursday 8th May 2014. The comprehensive date collection of 394 Sovereigns from the earliest hammered examples to modern milled is entitled The Hemisphere Collection and follows hot on the heels of The Bentley Collection of British Gold Sovereigns, sold by Baldwin’s during 2013 for £3,994,638.

Formed over 10 years from 2003, the current owner’s fascination with the history of the Sovereign has culminated in the only private collection known to the auction house that contains examples of each and every monarch for the Sovereign denomination.

Steve Hill, Director of British Coins at Baldwin’s said: “We felt 2014 was the year to expand on the success of last year’s sale of The Bentley Collection. The Hemisphere Collection is the first of its kind to track the Sovereign journey from its inception, circa 1500, to today, offering a new generation of collectors the opportunity to embrace the Sovereign, an integral part of British numismatic history and one of the world’s most respected gold coins.”

“In comparison to The Bentley Collection, The Hemisphere Collection brings together both handmade hammered and machine made milled coinage to give the fullest outline of the Sovereigns history, offering collectors of both hammered and milled Sovereigns an unprecedented opportunity to celebrate the denomination together.”

Amongst the modern milled coins on offer is an extremely rare example from the reign of King Edward VIII, who abdicated from the English throne just 326 days after his accession and an Elizabeth II Gold Proof Sovereign 1953, with an impeccable provenance, examples of which were never issued for private collectors.

The King Edward VIII, Gold Proof Sovereign dated 1937, is a legendary coin of the highest rarity. Never produced as a currency issue, due to the controversial abdication of the King, the sovereign was part of a proposed set, or a proof set, that was to be authorised as new coinage ahead of the King’s Coronation in 1937.

After the death of Edward’s father, King George V, in January 1936, Edward ascended the throne and coin proposals were produced carrying the head of the new monarch. Edward refused to follow the tradition established by King Charles II that dictated the portrait of each ascending monarch should face the opposite direction to his, or her, predecessor. The tradition had been followed by every monarch, with the exception of Edward VIII, who preferred his left facing profile and insisted on facing the same way as his father. The coin is estimated at £250,000-300,000.

Edward had a number of affairs with married women before meeting American divorcee Wallis Simpson in the 1930s. Against the wishes of his father he developed a relationship with her and famously abdicated his throne on the 10th December 1936 for the woman he loved so fervently, making him the first British monarch to do so voluntarily. Edward and Wallis Simpson married soon after and Edward’s brother George became the next King of England. 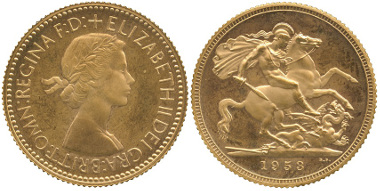 A 1953 Elizabeth II, Gold Proof Sovereign is one of the most valuable coins of our current queen, and beside the Edward VIII Sovereign, is the second rarest of the modern Proof Sovereign series. From her coronation year, the proof set was never issued for public sale, instead, a limited number were produced for national institutions to display publicly for the Coronation.

This example belonged to The National Museum of Wales, who sold and dispersed their set, with official permission, sometime after The Royal Mint moved to Wales. This example, appearing at auction for the very first time, has excellent provenance and offers bidders the opportunity to secure a piece of modern history. It is estimated at £250,000-300,000.

Introduced as a political propaganda tool to emphasise the stability and power of the King after the long and bloody War of the Roses, the Sovereign was first presented by King Henry VII in October 1489, with the earliest example in The Hemisphere Collection, a hammered Henry VII, struck circa 1502-1504.

It was the largest coinage in both size and value, with the reverse bearing the double Tudor rose, symbolising the union of the York and Lancaster Houses, and reinforcing its political message. This very well persevered example is an important piece of the denominations history and is estimated at £100,000-120,000.

The Sovereign continued to be issued by the Tudor and Stuart Monarchs until the reign of James I, whereupon it appeared in different later guises termed as ‘Pound’, ‘Unite’ and ‘Laurel’ for over 200 years until the re-coinage of King George III in 1816-17.

From here the history of the Sovereign is revived and The Hemisphere Collection continues, with the rarest London Royal Mint Sovereign, an 1819 George III.
Much smaller in size and weight, the new, redesigned sovereign adopted the iconic and patriotic design depicting St. George slaying the dragon, designed and engraved by Chief Medallist for the Royal Mint, the Italian artist Benedetto Pistrucci.

This Sovereign is one of only eight currency examples known to exist, and has never been offered at public auction before. The only previous record of the coin is as a plate coin in the Royal Mint publication Royal Sovereign 1489-1989, issued for the 500th anniversary of the Gold Sovereign. It is estimated at £50,000-60,000.

The Hemisphere Collection will be offered as a single sale in London on Thursday 8 May 2014.
The catalogue will be available to view online on the Baldwin’s website.

For more information about this historic collection and a preview catalogue please visit Baldwin’s section dedicated to The Hemisphere Collection.

Online biding with no additional premium is available through the services of The Salesroom.