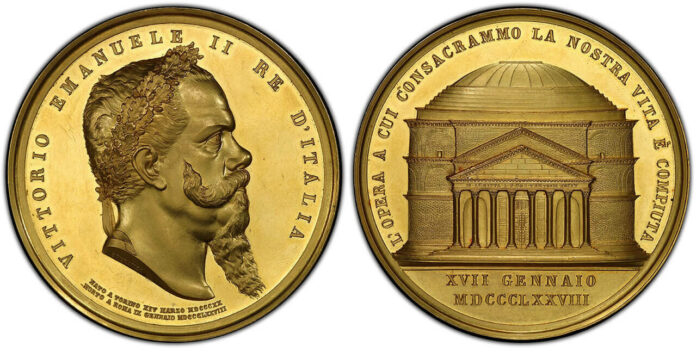 Atlas Numismatics has updated their website with 280 new coins, medals, and tokens at fixed prices. Selections include the following items:

Internment of Vittorio Emanuele II in the Pantheon

1055413: United States of America. 1781 AE Libertas Americana Medal. PCGS MS62BN (Brown). By Augustin Dupré. Paris. 48mm. LIBERTAS AMERICANA around, 4 JUIL. 1774 in exergue. Bust of Liberty left with flowing hair, staff with liberty-cap behind / NON SINE DIIS ANIMOSUS INFANS. The infant Hercules on his shield-shaped cradle, strangling a serpent in each hand; Minerva, representing France, stands over him, repelling with lance and lily-emblazoned shield the attack of the British lion. Betts 615; Loubat 14; Adams and Bentley 15.
Struck in Paris at the behest of Benjamin Franklin, who conceived the medal and suggested the mottoes, to commemorate peace following the American victory over Great Britain in the Revolutionary War. French artist Esprit-Antoine Gibelin sketched the design, while the dies were engraved by Augustin Dupré. The obverse portrait would later influence the first renditions of Liberty to appear on United States coinage, specifically those of the Liberty Cap copper coinage and the Flowing Hair silver coinage. The reverse design is highly symbolic, the two serpents representing the American victory over the British at the battles of Saratoga and Yorktown, with Minerva keeping the British lion at bay and confirming that ultimate American independence would not have been possible without French aid. The dates in the exergue on the reverse are the dates of the victories over General John Burgoyne at Saratoga and General Charles Cornwallis at Yorktown. Original striking of 1782. Housed in an oversized holder. $24,500.