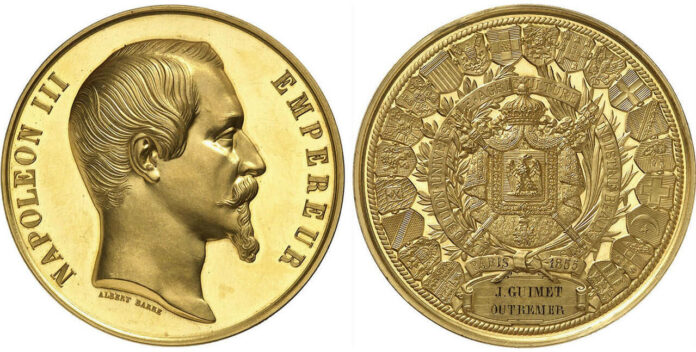 Atlas Numismatics has updated their website with 319 new coins, medals, and tokens at fixed prices. Selections include the following items:

For the Exposition Universelle in Paris. Awarded to and inscribed with the name of Jean-Baptiste Guimet for the development of artificial ‘outremer’ (ultramarine). Awarded to Jean-Baptiste Guimet, who also received the cross of the Legion of Honor during this event. He was a co-founder of the Chemical Company of Alais (Alès) and the Camargue. $55,000.

1052359: Great Britain. Victoria. (Queen, 1837-1901). 1838 AR Coronation Medal. PCGS SP64. Bandeau draped bust of Victoria left / Queen enthroned at right being presented crown by Britannia, Hibernia and Scotia at left. Eimer 1315; BHM-1801. On the Coronation of Queen Victoria. Superbly toned and very conservatively graded, in our opinion; the surfaces are exceptional and show the usual die-polishing lines as made. $5,950.