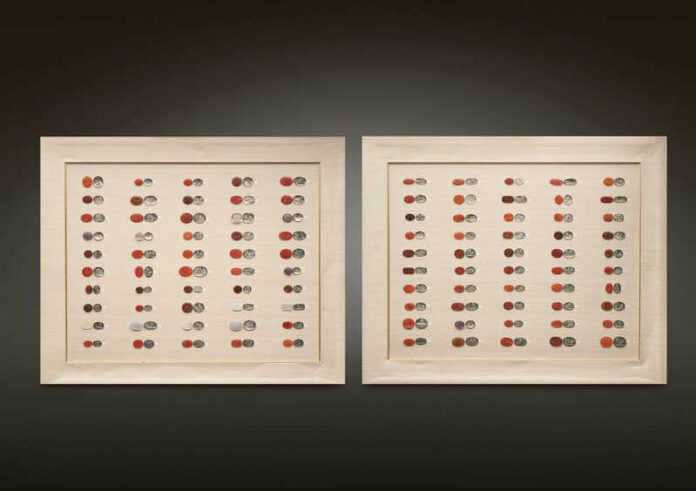 The hardstone gems from the collection of Prince Stanislas Poniatowski were mounted in two large Perspex frames with later electrotype casts of each intaglio. They were last on the market in 1972 when they sold for £12,000 – a fraction of the total sale price they fetched at Woolley and Wallis on 7th April 2022.

“This represents a sizeable portion of a very important collection and sparked keen interest among collectors,” said Jewellery specialist, Marielle Whiting. “The eventual buyer was a private Chinese collector who was delighted to acquire these, despite the high price.”

The intaglios were carved from stones including carnelian, amethyst, chalcedony and sardonyx, each with a Classical scene. Many featured pseudo Greek signatures and were commissioned by Poniatowski in the early years of the 18th century. The fact they were not genuine ancient gems was not discovered until after the Prince’s death, but the fact that many were carved by skilled and highly-prized artists of the day meant they were still highly prized.

“Poniatowski commissioned around 2,500 of these gems from engravers including Luigi Pichler and Giovani Calandrelli. This collection is believed to be the largest portion of the Prince’s intaglios to be offered at auction since the mid 19th century,” continued Whiting.

The intaglios featured as part of the Jewellery auction in Salisbury on 7th April 2022 where they sailed past their starting price of £40,000 and were hotly contested by a number of phone bidders.

“The extent of this collection, the size of the intaglios and the fabulous provenance all combined to make this lot hugely appealing to collectors. All this coupled with the fact that they hadn’t been seen on the open market for 50 years meant that we saw really competitive bidding on the day,” said Whiting. “The private Chinese collector who purchased them was absolutely delighted, and although other keen collectors were disappointed on the day the price achieved was a reflection of the collection’s importance.”

All results of the auction can be viewed in the online catalog.

For further information, visit the website of Woolley and Wallis.