The magnificent depiction of architecture on the reverse of a coin, rich in detail and seen from the bird’s eye view, gives us a very good idea about the layout of the ancient peak sanctuary of Neapolis in Samaria. Like the city, it was of relative recent date. Neapolis was founded by Vespasian as FLAVIA NEAPOLIS SAMAREIAS (= Flavian new town located in Samaria) probably in 72/73 after the First Jewish-Roman War. It replaced old Shechem that had been in decay for more than 200 years, as garrison at the entrance to the top of the pass between Mt. Ebel and Mt. Gerizim. Thanks to this location with its importance to transport the city experienced growth and thriving and hence was referred to as one of the biggest cities in the whole of Palestine.

The sanctuary at Mount Gerizim, not far away from Neapolis, depicted on the coin is even younger than the city. It was erected as late as Hadrianic times. As location Hadrian chose an ancient sacred site that played an important role already in the Old Testament as Mount of Blessings. Deut. 27.2 tells of Joshua calling the Israelites partly to Mount Gerizim to bless the people, partly to Mount Ebal to curse it. The main sanctuary of the Samaritans lay at the very spot; as late as the early 20th century, the fathers of the families went there every year to slay their sacrificial lamb for Passover. This original sanctuary was dedicated to Zeus Xenios or Hellenios in 168 B. C. by Antiochos IV, who drove the Jews into a rebellion with his radical policy of Hellenization without regard for the Jewish faith. Hadrian drew on that. He, too, tried to bind Judaea Province closer to the Roman Empire by hellenizing the Jewish culture. To achieve that, he had a big temple site built on Mount Gerizim in honor of Zeus. In order to make clear that this sanctuary was intended to replace the destroyed temple in Jerusalem as cultic center, the doors of the old temple were brought on as decoration of the new one. The epithet of the Zeus worshipped here, Hypsistos (= the Most High), betrays Hadrian’s well-intentioned attempt to merge Hellenistic-Roman ideas with the monotheism of the Samaritans here. 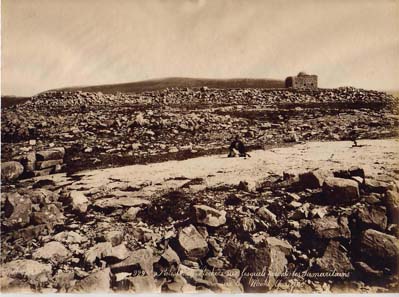 There is hardly anything left of the once gorgeous temple on the Mount of Blessings. Hence, archaeologists gladly resort to information provided by individual coins about the layout of the sanctuary. At the foot of the hill we see a magnificently designed entrance area with colonnades and a ceremonial door. From here the pilgrims walked up a large-scale complex of stairways to the actual sanctuary – it was the same procedure as we know today from quite a number of sacred mountains with pilgrimage churches.

All along the way small buildings were located that are shown on the coin in a way as if a small child had tried its best to draw little houses: two on the right, one on the left. These buildings presumably had the same function as the treasuries we find when visiting the Sacred Street at Delphi. The pilgrim climbing up the path should have been impressed by the power of a god so many grateful people had already sacrificed to. Right at the top of the hill we see the actual temple, a colonnaded edifice of the usual Greco-Roman type. To the right of the actual main sanctuary we find a small line; it stands for another way leading from the main entrance to an altar of Oriental type.

Of course, the coin doesn’t provide an illustration like a photograph. The proportions are wrong with the actual temple being almost as big as the entire mountain. The stairways, too, aren’t depicted in a naturalistic manner: the die cutter merely marked each landing with an incision. Nevertheless, we can get an idea of the size and importance of the sanctuary thanks to this coin. The citizens of Neapolis were proud that their city housed this cultic center and so they presented it with all the spots that stuck to the mind of every visitor, the monumental entrance, the splendid pilgrimage path uphill to the temple, the impressive temple itself and the altar that was only accessible via a hidden path.