In A. D. 14, shortly after the death of Augustus, a perhaps not entirely altruistic senator proposed a motion to register the whole lifetime of the late Augustus as “Augustan Era” in the state calendar. That hit the nerve of the time. After the death of Augustus, the Romans were under the impression that it was he – a single honest citizen – who had led them out of the turmoil of the Civil War, putting an end to the egoistic power struggles of the quarreling imperators and restituted the Republic, where all the ancient virtues, the true Roman values were prevailing again. Only thanks to him all citizens worked for the benefit of the Roman people again.

That estimate of most of the Romans was surely due to a well-wrought propaganda Augustus applied so skilfully. No one would have dared to refer to Augustus as an autocrat, a tyrant and hence… called things as they were. Oh no, Augustus was a citizen among equals.

He appears on his coins accordingly. Entirely civilian, he is not shown like later emperors, neither with the triumphant laurel wreath nor with the commander’s suit of arms and mantle. The titles likewise couldn’t be more modest: CAESAR AVGVSTVS. Let it be understood, title, for the first citizen never used his name Octavianus on coins. The name of his adoptive father Caesar was much more attractive. That name became program. In contrast to the other contestants in the struggle for power who put themselves in the middle of their coinage, Augustus focused entirely on Caesar. I am the son of the dear murder victim which you, the Roman people, have consecrated – that is the keynote of every single coin he had produced during the time of the Civil War.

With this title, Augustus did not rely on definite messages at the beginning of his reign, but on emotions he drew on himself being the juvenile defender of his murdered father’s rights. When our coin was produced, however, he had left that stage way behind. From 27 B. C. he was entitled to call himself Augustus in addition. A solemn title which reminded the Romans of an augur, i.e. the priest who foretold the destiny of the Roman people by watching a bird’s flight. It would be difficult, therefore, to translate Augustus – as difficult as asking a pupil about a correct interpretation of the word cool. The word Augustus came with so many overtones: venerability, sanctity, sublimity; in short, that title designated a person which the gods had sent the Romans to bring order to their muddled destiny; it was a divine child, juvenile forever, which on the coins did not age at all and hence sounded the bell for the new golden era. 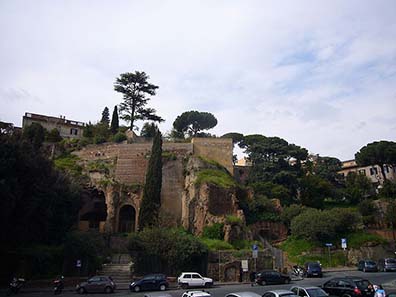 But how does the depiction on the reverse fit into this? It shows Tarpeia, name giver of the Tarpeian Rock, from which the traitors were hurled in Rome. Tarpeia herself had been a traitor which almost had been the Romans’ undoing. When, from time immemorial, the Sabines fought the Romans to avenge the abduction of her daughters, she betrayed the Romans to the enemy. According to Livy, her father was commander of the citadel, and therefore the young maiden could open up the way into the fortress to the enemy soldiers. About her motives for doing so, the writers differ. Some say that she had been one of the abducted Sabine women and did it in revenge, while others claim that love had a hand in this. But let us stick to that what was currently going on in Augustan times. Livy reported that Tarpeia had been bribed. The bracelets made of gold which the Sabines bore on their left arms had awaken her greediness. Hence, the maiden betrayed the Romans for what the Sabines wore on their left arms. But: on the date of attack, the Sabines had doffed their precious jewellery – they merely bore their heavy shields on their arms. With that, they “rewarded” Tarpeia, threw them upon her until she was buried under the heap.

The present-day viewer of the coin can draw the lesson that treason does not pay off. To the Roman user it was likewise visualized that the Roman state was too powerful and mighty to be ruined by the betrayal of a single individual. The gods were on the part of the state and hence Jupiter himself supported the Roman army in its attempt to re-conquer the Capitoline Hill. The quarrel was settled when the abducted Sabine women threw themselves between their fighting Sabine fathers and their Roman husbands. Therewith, they paved the way for a peaceful solution – and this leads again to the coin’s other side. During the Civil War, it hadn’t been any Sabine women who unified the people but Augustus. This is how the modern viewer can understand the message of the coin: as long as Augustus reigns, and with him virtue, no Tarpeia can do us harm.

By the way, a few words about the person responsible for the propaganda. Answerable was a mint master called Publius Petronius Turpilianus. Augustus had passed the baton of supervising the coin production and choosing the motives the imperators had usurped to the civil servants again as the ones responsible in the first place. This was another measure which, in the eyes of the Republican Romans, so pleasantly separated him from the former ruling powers. And so it was a civil servant who, with the coin image chosen by himself by which he hinted at his descent, expressed his loyalty to Augustus.

ere we can grasp how profoundly the Augustan policy was supported by the entire Roman populace – and how the gratitude to the revered ruler was converted into propaganda again.