In 485, Gelon managed to gain control over the city of Syracuse. At that time, the city already looked back at decades of minting coins which featured Arethusa and a horse chariot.

The most important coin production in Sicily was that of the city of Syracuse. It started in the late 6th century and reflects the economic prevalence of the city at that time. The Syracusan weight provided the standard that was followed by the coinage of all other Sicilian cities thereafter.
On the obverse we see a charioteer in a quadriga going to the right. This depiction hints at Olympia.
To us, this sanctuary is known mainly because of the quadrennial games. These did not constitute the main element in ancient times, however. More important were the sanctuary of Zeus and the relevant oracle. It sent its priests to accompany the settlers who were looking for a new home. One source actually speaks of such a priest from Olympia accompanying the Corinthians who founded Syracuse. As a token of their gratitude, the people of the city used to send festive delegations for centuries. These delegations of course also accompanied the athletes who were participating in the Olympic Games.
The Syracusans proved particularly successful in the horse chariot. They considered this a sign of Zeus still being well-disposed towards their founding. And so the horse chariot became the emblem of victoriousness, no matter if a coin was struck in times of a tyrannis or a democracy.
The chariot became the model for the obverse dies of several Sicilian cities: Gela and Leontinoi, for example, struck coins with this very image, and later the type was even adopted by most of the Punic mints.
The flat, four-squared incuse is well-known from Archaic strikings, although the Syracusans enriched it with a local element: the small circle inside the incuse features the head of the fountain nymph Arethusa. According to the legend, the river god Alpheios chased the fleeing fountain nymph Arethusa. His source region is located in Arcadia from where he flows, passing Olympia on his way to the sea, right towards Syracuse. Driven by his desire to unite with the beautiful nymph, Alpheios is said to have flown through the saltwater without merging, directly to the Ortygia island where the Arethusa fountain, which is dedicated to Artemis, is giving water until the present day. Only when he arrived there he joined his waters with those of Arethusa.

Already before Gelon seized power, certainly before 485, Syracuse modified its imagery: the ethnicon (= the name of the city) no longer formed part of the obverse but was put on the reverse. The quadriga on the obverse was supplemented by a Nike who crowns the chariot. On the reverse the geometric incuse was abolished whereas the head of Arethusa was enlarged. Pointing to the geographical position of Syracuse near the sea, four dolphins surround her head. The dolphin was considered a companion of the ships and a guarantee for a smooth and safe passage. He may have referred only to the four drachm piece but likewise to the storm-proof port of Syracuse located between the Ortygia island and the mainland. 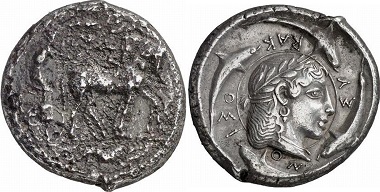 The legend of the demarateia

One of the most famous ancient coins is the so-called demarateion. Diodorus XI. 26. 3 tells us the following story: making the preparations for the fight against the Carthaginians, Gelon had gotten into financial trouble. To support him, Demarete, his wife, gave him all of her jewelry. After the victory over the Carthaginians, she was of course compensated. Since she had advocated in favor of the captives and all remaining Carthaginians during the peace negotiations, she received a gold wreath worth 100 talents as a token of gratitude from the enemy’s representatives. She then had coins struck from this wreath, in the weight of 50 litrai or one decadrachm (= 10 Attic drachms), called demarateia.

As early as the 1830s, these coins were identified with the decadrachms and the tetradrachms – which were similar in style –, an example of which we see above. The exact date of this series, the year 480/79, had provided numismatics with a chronological cornerstone which helped to date virtually all other coin series. In the last 20 years, however, more and more doubts about this identification have been expressed. Above all, stylistic reasons point to a later date and hence speak against taking the above-illustrated coin as the demarateion that was described by Diodorus and considered a memento of the Battle of Himera.

The modern interpretation of the demarateion series

On the basis of her examination of hoard finds, Carmen Arnold-Biucchi proposes a date of this coinage between 475 and 470. She believes that these large-denomination coins were not produced to commemorate a historical event (which, by the way, would have been a completely alien idea to the Greeks). They were produced because it was necessary to pay the mercenaries after the war with the Carthaginians was over. This would explain the great distance of time between the Carthaginian gift to Demarete and the minting of the demarateia.
On the latest dates for this era of Syracusan coinage compare the book written by Carmen Arnold-Biucchi, The Randazzo Hoard 1980 and Sicilian Chronology in the Early Fifth Century B.C., Numismatic Studies 18, ANS New York, 1990.

The fight against the Carthaginians is in the spotlight of the upcoming episode of the Sicilian Mosaic.