The founder of the city was a popular subject in the imagery of daughter cities, as was the victory in horse racing. Why this was the case is explained in this part of the Sicilian Mosaic that revolves around the coinage of Dankle-Messana and Rhegion.

Double city on either side of the strait

Rhegion and Dankle were connected from very early on. In the late 8th century, the Chalcidians from Dankle, together with the Messenians from the Peloponnesos, began colonizing Rhegion. Located on either side of the passage between Sicily and Italy, the two cities controlled the trade with the Western part of Southern Italy. After the tyranny of Anaxilas, as the ruler over both cities, had come to an end, a new coin type was introduced after 461: the obverse features a lion’s scalp which points to this city’s important cult of Apollo and may be regarded a reminiscence of the short reign of the Samians in Messana. The reverse depicts the mythical founder of the city, Iocastes. 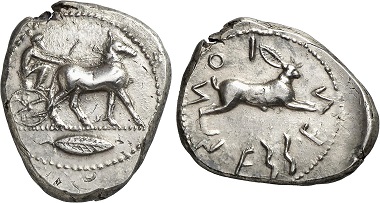 With this coin we look at one of the very few Greek depictions that refer to a distinct historic event and were meant to be read this way already in ancient times. The tyrant of Rhegion, Anaxilas, came out victorious in the mule race in Olympia and celebrated this achievement by introducing a new coin type. The hare depicted on the reverse, in contrast, appears to be related to the god Pan. 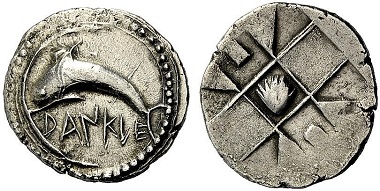 Dankle, or Zankle as it also called in the sources, allegedly was the Sicel term for sickle. It refers to the shape of the port. The secure locations of the port and the protection it granted the passing ships against storms and unfavorable streams of the strait (this is the place where Greek geography locates Scylla and Charybdis of the Odyssey) provided the basis for the city’s wealth.
It is clear to see from the coinage how proud the citizens of Dankle were of their port: the obverse features a dolphin swimming into a sickle-shaped port. The dolphin is considered a companion of the ships whom he grants “euploia”, hence a safe passage. It is reasonable to assume, therefore, that the coin represents the secureness of the Dankle port which literally served as a safe haven for the ships.

In 494, the tyrant of Rhegion, Anaxilas, conquered the city of Dankle, assisted by some Samians who had been driven from their home during the Ionian Revolt. And so we find coins with a Samian type for a short period of time: lion’s head / prora on coins from Dankle, renamed Messana.

Shortly thereafter, however, Anaxilas expelled the Samians and assumed control over the city. To express his dominion over the two cities also in the coinage, Messana rigidly adopted the Rhegion model: the mule-biga, driven by a seated charioteer, on the obverse and the hare springing right on the reverse. This subject became the point of departure for the Classical coinage of Messana.

Please read in the upcoming historical part about the problems the settlers in Sicily soon faced “in their own house”.