On this coin, the king is depicted with such a wild mane of hair that you really might think you are facing a lion. Richard I “the Lionheart” was famous for his bravery as a crusader. The circumstances of his incarceration were rather sad, though. Its consequences even inspired the legend of Robin Hood.

Together with Philip II of France, Richard set out in 1189 to conquer Jerusalem. After years of fighting side by side, the two kings fell out with each other, and Philip returned home. In 1192, trouble was brewing in England, so Richard started on his return journey, as well.

Accompanied by some of his followers, the king headed inland from the Adriatic coast planning to meet his brother-in-law, Henry the Lion. As a Crusader, he was under Papal protection, but not everybody abided by it. Legend has it that his courtly demeanour and the fact that he was spending lots of Oriental coins gave him away. Leopold V, Duke of Austria, captured the group of travellers in the proximity of Vienna. Shortly afterwards, the duke handed over his prisoners to the Holy Roman Emperor Henry VI. The amount of his share of the expected ransom was set in a contract. 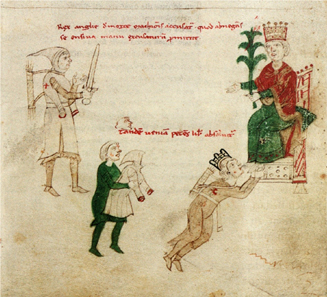 The emperor demanded a colossal sum from England – over 30 tons of silver. That was almost three times the yearly revenue of the Crown. However, the captive king did not have any other choice than to accept the humiliating conditions. For the time of his absence, Richard had entrusted the kingdom to his mother, Eleanor of Aquitaine. To raise the ransom, she sold land and possessions, chandeliers, silverware and jewels; in fact, she was so efficient at it that almost nothing valuable remains from that time.

The people also suffered under the enforced collection of taxes; during the resulting unrest some men rendered themselves conspicuous, the stories of which later brought forth the myth of Robin Hood. The country was on the brink of ruin. Richard was set free in 1194. As established in the contract, he immediately asked the Pope to rescind the excommunication of Duke Leopold, punishment inflicted on him for imprisoning a crusader. On his deathbed, the duke had to promise to pay back the pennies he had received from England – in return, he was absolved by Pope Celestine III.

The ransom money was never restored, though. Leopold had used his share to found a mint and pay for major building projects. Henry’ silver had been spent on a campaign to conquer Sicily. The Austrians wanted to commit what little was left of the money to the English knights whom they had held as hostages. These, however, refused to take care of the remittance for fear of being robbed.