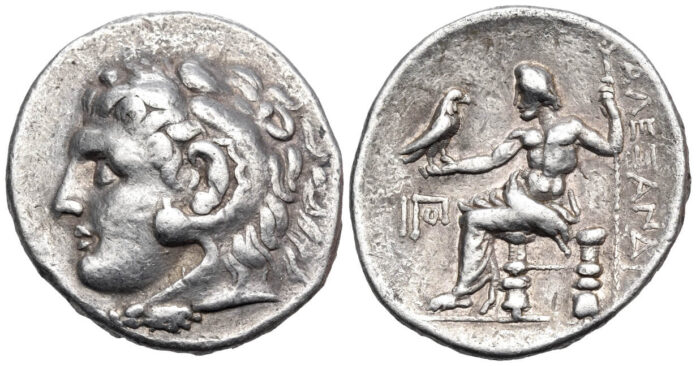 Once again, the secret of success for an eSale is to have nice material, a wide selection, and fair and reasonable starting prices: that is what we had in Obolos 19 and it was 95% sold! That is a great result since everyone is happy: the new owners, the old owners, and us. One of the wonderful things about being able to have internet auctions, without printed catalogues and the concomitant formalities, is that coins of all possible values can be presented individually with careful cataloguing and good photographs: it may still be uneconomic to present really low value coins individually – though try telling that to our Dimitris, the collector’s friend! – but the way collectors of all kinds can participate is really gratifying. So here are some enjoyable results…

Remember the Hyria I wrote about last time, lot 8 with its starting price of 200 CHF? It went to a Swiss bidder for 360 CHF – a nice price for such a coin. If you remember, I wrote about this coin’s extraordinarily interesting owner, Pasquale del Pezzo, Duke of Caianello, whose wife was a Swedish writer, Anne Charlotte Leffler; and that she and both her husband and her brother, the Swedish mathematician Gösta Mittag-Leffler, were friends of Sofya Kovaleskaya, the greatest female scientist prior to the 20th century. What I neglected to include was that Sofya’s sister was Anna Vasilyevna Korvin-Krukovskaya – Anne Jaclard – the Russian feminist and revolutionary, who was a friend of Marx (among other things). This coin really has quite a lot of association value!

Here are some more coins, lacking such associations with personalities of the 19th century, but fascinating, nevertheless. A Tarentine stater with a military leader, rather than a jockey, an ephebe or an ordinary soldier, on horseback on the obverse it sold for 1,800 CHF, with a starting price of 450 CHF.

Another coin that aroused a great deal of interest was a nomos from Metapontum, lot 48, which went from a starting price 250 CHF to 1,600 CHF thanks to no fewer than 15 bids! Perhaps the pair of tongs that was used as its symbol gave it a special interest?

Lot 145, a bronze of Spartokos, a king who ruled from Kabyle in Thrace for a short time after the death of Lysimachos. The obverse is quite extraordinary: a janiform head with a roaring lion to left and the head of a bearded man to right; the club that appears as an adjunct below suggests that this might be Herakles and the Nemean Lion. It is very rare, indeed, and went from a starting price of 100 CHF to 460 CHF.

Ancient forgeries, whether made semi-officially or by counterfeiters (sometimes one cannot tell one from another) have always been a popular niche area of collecting: lot 161, a plated stater of Neapolis in Macedonia. Given a starting price of 200 CHF it went on to 550 CHF:

Sometimes our starting prices and be, really, somewhat low! Given a starting price of 200 CHF this stater of the Macedonian king Archelaos, 413-400/399 BC, deservedly soared up, with a total of 19 bids, to a final price of 1,400 CHF!

But lot 184 went outstandingly well, due solely to its great rarity: it had a starting price of 500 CHF but its ten bidders drove it to 3,104 CHF!

Another great rarity for the specialized collector: a chalkous from Delos struck during the middle Hellenistic period. This jumped from an starting price 40 CHF (my fault – I thought it was worth almost nothing; oops!) to 650 CHF(!) driven by 11 bidders who knew more than me!

A tetartemorion probably struck in Cilicia with a curious head on the obverse, an extremely odd-looking bird on the reverse, which looks like it inspired one of the Martin Brothers’ “Wally Birds”. Lot 419, starting price 75 CHF, sold for 300 CHF.

Clearly struck and nicely centered, lot 657, from the Stoecklin Collection and that of Professore Dottore G. Giorgi (Ratto, 1955) had 19 bids and went from an starting price of 100 CHF to 1,200 CHF!

Why are we highlighting this coin? Well, according to the explanatory title put in by our Dimitris in the online catalogue, this radiate of Aurelian minted in Cyzicus in 271 is “the finest of only two known.” Well – welcome to pedant’s corner! – nothing can be the “finest of two known”, though it can be the finer. Actually, the portrait is amazingly realistic and unidealised, so it is understandable that this coin, lot 955, soared up from its starting price of 30 CHF to a generous 35 CHF! It did have two bids, though… But that portrait really is good…

Byzantine seals are becoming ever more popular with erudite collectors because of the information they can provide about so many individuals, both known and unknown to history, and because of the relatively intimate connection they have with the people for whom they were made. One piece is in the name of Maria, daughter of Gagik-Abas II of Kars, who was, herself, ruler of Tsamantia/Tzamandos (lot 1114, starting price 200 CHF). Intriguingly enough, the last line tells us that she is in the “line of David”, but which David this is (there were several about this time) is unclear. In fact, it might actually be suggesting that she, like the Virgin Mary on the obverse, was descended from the Biblical House of David! In any case, a very important seal, one which rightfully soared up to 3,600 CHF!

Check all lots of the sale including the prices realized to find all the other surprising results.

Remember, if you have any questions or numismatic problems, or have coins you want to buy, consign or sell, contact Nomos.

September, 23. 2021
In Obolos 20 Nomos AG offers almost 500 lots from the well-known Vineyard Collection focussing on ancient coins with types that have references to wine. Collectors will find many rare and unusual coins with solid pedigrees. Alan Walker presents some of the highlights.
error: