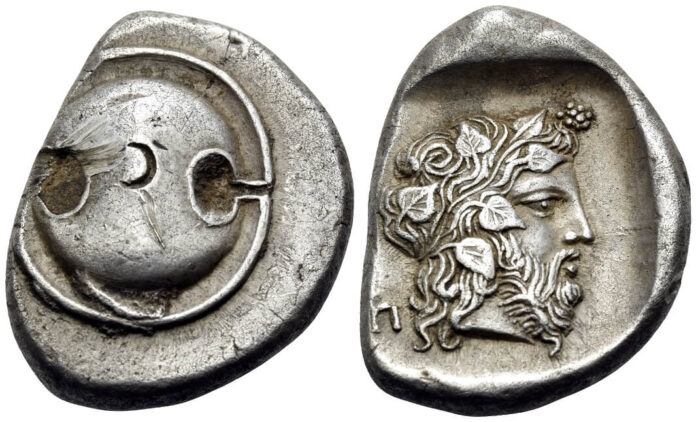 Obolos 16 turned out to be a wild success: it was over 96% sold, which can only be termed a wonderful result! And it was a result that was good for our consignors, good for us, and, equally important, good for all those collectors buying coins from us. Some got coins that they considered to be bargains and others had to pay seriously high prices, but when they saw the great number of other bidders who competed against them, well, they realized that their own good eye was fully justified! The first result that I am going to list proves that point perfectly: Lot 32, a very nice triobol from Maroneia, which comes from a Vinchon sale of 1997 and had the attractive starting price of 100 CHF: it sold for 1600!

A hemidrachm, lot 92, is of wonderful style, with a magnificent Janiform head of Silenos paired with two volute kraters (yes, they look like amphorae but they’re not). It also had an SP of 100, but it soared to 1200!

There is a splendid ruler portrait, from the second quarter of the 4th century, appearing on a trihemiobol of Kotys I: SP 150, it soared up to 1300 (lot 122).

Lot 137, a possibly lifetime or early posthumous tetradrachm of Lysimachos with the hitherto unknown symbol of a crouching griffin: with an SP of 250 it sold for 1500.

I already marked out this AE Trichalkon of Rhizos (lot 208) for its wonderfully fine style, great rarity and fine pedigree: it soared from an SP of 300 to 2600!

Here we have the remarkably elegant head of Dionysos that appears on lot 274, a late 5th century BC Boeotian stater. It is not hard to see why it went from a SP of 750 to 3600!

Specialist rarities can do remarkably well: lot 645, a dichalkon from the obscure Macedonian city of Oisyme (SP 100): so, despite its condition, it sold for 1000…

I thought that the portrait of Philip II on the reverse of lot 655 (SP 300 CHF) was remarkable, and so did a number of others: it received 8 bids and went for, in my opinion, a still inexpensive 750.

Lot 803 (SP 250 CHF), a very rare early hemihekte from Kyzikos, which one cataloguer thought was terrific. Turns out he was right, as it went right up to 800!

But even great rarities can, as they would say, fall through the cracks. The tiny silver tetartermorion (lot 835, SP 100 CHF) from Magnesia ad Maeandrum, was struck by Themistokles’s son Archepolis in c. 459 BC, and it is a coin of considerable interest: yet a single bidder got it at the starting price!! There will always be bargains if you know where to look…

I highlighted the portrait on an oktachalkon of Aristobulus of Chalcis, King of Armenia Minor (lot 924, SP 1500 CHF): it went for 2830 CHF.

Lot 972 (SP 100 CHF), an extremely rare Roman Provincial Quinarius of Diva Faustina I struck by Nicopolis in Epirus: it moved right up to 950.

When great rarity combines with immense desirability prices can and do go through the roof. Lot 1057 is a perfect example, an extremely rare dupondius struck in 113-114 by the Koinon of Armenia under Trajan. Given a starting price of 750 it was fought up to a successful bid of 6000 CHF!

I already highlighted the very elegant denarius of Antoninus Pius (lot 1142, SP 100 CHF), because the type happens to be a particular favourite of mine. It went up to a deserved 550.

I was amazed by the coin from the first second I saw it after the sale went online. It is a 40 Nummia piece from Ravenna struck for Maurice Tiberius in 583/4 (lot 1232, SP 50 CHF). I already highlighted it and I was very happy to see how many specialist collectors saw it too: it received a total of 26 bids and sold for 1300!!

Frankly, the sale was filled with wonderful results at all price levels, and there are a great number of happy customers and consignors! Do check through all the sale results and you will see! Prices realized can be found here.

For more information on the company and the forthcoming sales, please go to the Nomos website.

December, 5. 2019
The newest e-auction of the Nomos AG offers as usual a wide and high quality selection of Greek, Roman and Byzantine coins as well as medieval and early modern coinage. Alan Walker gives an overview. Do not miss his wisecracks.
error: