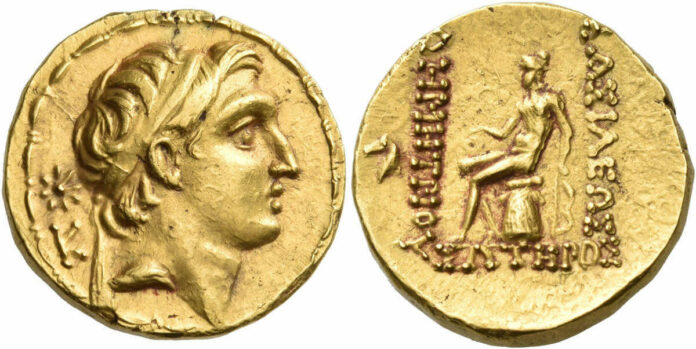 Nomos 23 was held on the last day of November, a cold, grey, rainy-snowy, typically Zürich winter day, one that made staying inside – in the auction room itself or in a comfortable place where you could bid online or on the telephone – a perfect idea. In fact, there were very few people in the room: some professional numismatists and dealers in coins and antiquities acting as agents for themselves and their clients, one genuine, bona fide collector, and five highly talented and attractive people who were constantly on the telephone with an absolute record number of telephone bidders! In other words, while there were few people physically present, it seemed like the whole world was with us online or on the phone! There were active and enthusiastic bidders from America, China and Russia; from Denmark, England, France and Germany; from Australia, Japan and Singapore; and while they were all competitively bidding against each other, they weren’t shooting at each other! Maybe if there were more coin collectors in the world, the world would be a happier and safer place?

Among the lots in Nomos 23 were a number of ancient coins from Sicily from “the Collection I” in the USA. They were chosen by a businessman who loves attractive Greek coins because they make him happy when he looks at them (!), and because having them provides him with a physical link between the increasingly complicated modern world we live in, and the historical events and mythology of Classical antiquity. Luckily, he also has a very good eye:

Many of you may have noticed that the online version of our catalogue has quite a few exciting pedigrees that are not in the printed catalogue. The reason for this is that our Pedigree-Hunter© in Oz, who previously only had a fashionably monogramed (LV) personal tucker-bag filled with stents, ICDs and LVADs, now has it filled with provenance research, including many really exciting and interesting ones. Here’s one:

We try to be conservative with our estimates, but sometimes we seem to be too conservative, perhaps because there are sudden jumps in demand. A perfect example of that comes from Corinthian and Corinthian-Type staters, which have become massively popular.

Sometimes great rarities turn up in odd places, in this case from a box of miscellaneous ancient coins, which an old Swiss, part-time dealer, had squirrelled away since the late 1940s.

Let’s end for today with two other highlights:

You can find prices realized for Nomos 23 sale in the online catalog.

February, 11. 2021
Nomos’ new e-auction Obolos 18 is a single-owner sale being dedicated to the large Trausnitz collection. The collection was closed in 2007 and features some very interesting specimens with good provenances. Alan Walker presents one true specialist rarity.
error: