The fairy tale is called “The Silver Shilling” and begins as follows: “There was once a shilling, which came forth from the mint springing and shouting, ‘Hurrah! Now I am going out into the wide world.’ And truly it did go out into the wide world. The children held it with warm hands, the miser with a cold and convulsive grasp, and the old people turned it about, goodness knows how many times, while the young people soon allowed it to roll away from them.”
The fairy tale, however, isn’t just concerned with such elementary wisdom, but the author deals with the intrinsic value of the piece of money as well: “The shilling was made of silver, it contained very little copper …”

At the time Hans Christian Andersen wrote his fairy tales, however, that was already obsolete. The Napoleonic Wars had made the Danish treasury almost go bankrupt. Until 1908, in Denmark, too, shillings – or skillings, respectively – weren’t made of silver anymore but of copper.

Thus, our old shilling Hans Christian Andersen refers to was a particularly good piece of money, a valuable one, of appropriate weight and fineness – unlike its successor, a coin without intrinsic value. But how dealt the 19th century with unknown coins? Roughly 100 before, it had been normal procedure that anyone could bring foreign currency to a mint that took it at material value at a small extra charge. In the 19th century, however, the production of coins had been centralized with only some major cities still having its own mint. In addition, states in all of Europe had begun to accept only their own currency or the currency of the countries they had formed a monetary union with, respectively. Consequently, he who intended to visit another country was forced to travel with local currency since his own, local money wasn’t accepted anywhere else. That made the number of different types of money circulating decline considerably – as a result, our shilling, which its owner had taken with him to another country only to get lost there – faced the frightening experience that no one in the entire country wanted to possess it. “That is not a genuine coin of the country,- it is false; it is good for nothing.” Such were the remarks our coin had to listen to from then on.

What is next is a lesson of how people back then dealt with money they deemed bad. Despite its silver content, which was very likely to exceed its nominal value significantly, nobody wanted to keep the shilling. It was passed on as quickly as possible – albeit off the record. Anyone trying to pay with the shilling in broad daylight experiences something quite similar as the woman at the bakery: “… but he knew the current money too well, and as soon as he received me, he threw me almost in the woman’s face.” Hence, the same was tried again, but in the dark, when the recipient wasn’t able to get a close look at what he was given exactly.

He who tried in vain to pass on the bad coins was welcomed to do just what the poor woman at the bakery did: “The woman took me home again with her, and looking at me very earnestly, she said, ‘No, I will not try to deceive anyone with thee again. I will bore a hole through thee that everyone may know that thou art a false and worthless thing; and yet, why should I do that? Very likely thou art a lucky shilling. A thought has just struck me that it is so, and I believe it. Yes, I will make a hole in the shilling,’ said she, ‘and run a string through it, and then give it to my neighbor’s little one to hang round her neck, as a lucky shilling.’ So she drilled a hole through me. “It is really not at all pleasant to have a hole bored through one, but we can submit to a great deal when it is done with a good intention. A string was drawn through the hole, and I became a kind of medal. They hung me round the neck of a little child, and the child laughed at me and kissed me, and I rested for one whole night on the warm, innocent breast of a child.”

That, however, still doesn’t conclude the fairy tale yet. The next stage of our coin’s journey illustrates how a hole in a coin was repaired in the 19th century: “’Lucky shilling!’ said she, ‘certainly this is what I mean to try.’ Then she laid me in vinegar till I became quite green, and after that she filled up the hole with cement, rubbed me a little to brighten me up, and went out in the twilight hour to the lottery collector, to buy herself a ticket, with a shilling that should bring luck.”

Did the ticked indeed turned out to be a lucky one? Well, Hans Christian Andersen leaves open the question. He sends his shilling to continue its journey from hand to hand, until one day it arrives at a Danish traveller. Just like the moment of darkness, when it wasn’t possible to examine every coin in detail, a traveller was a particularly suited person to dispose of bad money. After all, he wasn’t that familiar with the circulation money as the locals. Hence, Andersen writes: “At length one day I was passed to a traveller, a foreigner, the very same who had brought me away from home; and he was simple and true-hearted enough to take me for current coin. But would he also attempt to pass me? And should I again hear the outcry, ‘False! Good-for-nothing!’ The traveller examined me attentively, ‘I took thee for good coin,’ said he; then suddenly a smile spread all over his face. I have never seen such a smile on any other face as on his. ‘Now this is singular,’ said he, ‘it is a coin from my own country; a good, true, shilling from home. Someone has bored a hole through it, and people have no doubt called it false. How curious that it should come into my hands. I will take it home with me to my own house.’” And that was precisely what happened next: “I was wrapped up in fine, white paper, that I might not mix with the other coins and be lost; and on special occasions, when people from my own country happened to be present, I was brought forward and spoken of very kindly. They said I was very interesting, and it was really quite worthwhile to notice that those who are interesting have often not a single word to say for themselves. At length I reached home. All my cares were at an end. Joy again overwhelmed me; for was I not good silver, and had I not a genuine stamp? I had no more insults or disappointmements to endure; although, indeed, there was a hole through me, as if I were false; but suspicions are nothing when a man is really true, and everyone should persevere in acting honestly, for an will be made right in time. That is my firm belief,” said the shilling.” 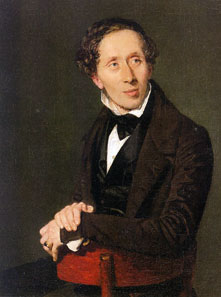 By that, Hans Christian Andersen had arrived at the moral of his story – after all, he didn’t just write his literary fairy tale for amusement only but for edification and education of his readers. He claims that true value will prevail – given it has stamina enough to stand all allegations.
Anyone who doesn’t like this moral’s priggish smack had at least been given the chance by ‘The Silver Shilling’ fairy tale to look at 19th century people dealing with their money.