Parliament had to decide whether the new king was legitimate. In 1485, a conflict that had arisen from long-standing rivalries was waged on the battlefield and Henry came out as winner. The coronation had already taken place before requesting its approval by the nobles, and Henry had had all his opponents put to death for high treason. But he left it to the members of Parliament to legitimize his position. And, indeed, they took a wise decision: As Henry was on English throne, he was the rightful king.

In battle and with brutal measures, Henry had made it clear among the nobility that power was his now. In the following, however, he sought reconciliation. Through his mother’s line, he was related to the House of Lancaster, which – just like the House of York – was descended from Edward III. During the War of the Roses (both families had a rose in their badges), the two dynasties over several decades engaged in a desperate struggle for the crown. A new coin, which would be used throughout two centuries, was issued then. It was called the Angel, as it bore the image of St Michael on its front side. 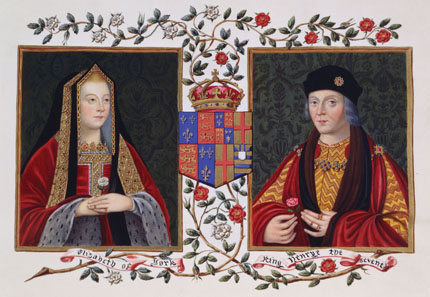 Double portrait of Elizabeth of York and Henry VII, by Sarah Malden, Countess of Essex (c. 1761-1838). From: Lucy Aikin’s Memoirs of the Court of Queen Elizabeth, c. 1825. Source: Wikipedia.

To put an end to old enmity, Henry married Elizabeth of York, thus uniting the two houses, which was made visible in a new heraldic emblem combining the white rose of York and the red rose of Lancaster. The wedding, however, was only held in the following year: Nobody should think that Henry owed the crown to his wife.

After the initial bloodshed, the new sovereign could concentrate on the government of his kingdom. Henry proved to be a financial wizard. No other English king was so gifted and deeply absorbed in these matters, keeping an eye on the books and on his own experts. He squeezed the maximum revenue from his possessions. Thus, he managed to solve a basic problem of his predecessors, as in terms of finances he was not so dependent on the nobility and Parliament. If his vassals had refused allegiance to him, Henry could have hired mercenaries to enforce his power. As a result of his creativity in the realm of finances, some were quite relieved when Henry died in 1509 …

For the first time in 100 years, a king, upon his death, was able to pass on the crown to his son unchallenged, thus establishing a new dynasty that took its name from Henry’s paternal lineage – the Tudors.