Why was it, one is inclined to ask, that so many Renaissance kings went to Italy? Why didn’t they stay in their countries and counted on what was to be called the absolutist central state one or two centuries later? Why did they spent enormous sums of money on the payment of troops to conquer a small city in Italy whose destiny it was to be re-conquered again only
months later?

The ‘skyline’ of Florence, the centre of rich Tuscany. Image: Lucarelli / Wikipedia.

It was the splendour of the long gone medieval era that pulled figures like Charles VIII, King of France, or his successor Francis I to Italy. The imperial office – in conjunction with the monarchia universalis, the world dominion – intoxicated persons like the down-to-earth Spanish King Charles V. Plus, there were the flourishing Italian trade cities whose taxes were promised to the winner over Northern Italy. After all, in Central Italy no ruler – be it German, Spanish or French – was to be gained a foothold with the Pope ruling who had returned home from his exile in Avignon and was determined to re-conquer the lost territories. Anyone planning to dominate the south peninsula had to keep in with the Pope since the Kingdom of Sicily was regarded Papal feud and was occupied at his discretion. 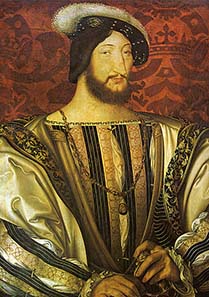 That was the point of departure when Francis I of France and Charles V of Spain began to locks horns in Italy. Charles had already outmaneuvered Francis a few years earlier when the two rulers were fighting over the German emperorship. It was not about ruling the German states which were at loggerheads after the reformation – no, with the title of emperor came the supremacy over the Italian cities, and Francis had made a couple of conquests there already. Charles aimed for world dominion which the Roman Emperor of the German Nation was entitled to. The two, very different, kings initiated propaganda in the empire and outdone each other with pre-election promises. In June 1519, the prince-electors decided in favour of Charles for the simple reason that he had paid more. Of course, Francis did not retreat from Italy. Quite the contrary: the fight had only just begun. 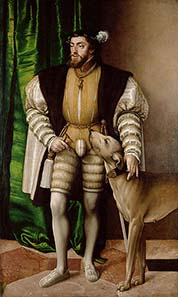 The war broke out in 1521. France had mobilized 32,000 soldiers, a huge army which mainly consisted of Swiss rice’s runners, the then elite fighters. Their pike square (German: Gewalthaufen which means crowd of force) – a military formation which, in principle, was evocative of a running porcupine – was considered decisive in any battle. Nevertheless, Francis was not as successful as he hoped for.
After all, the art of warfare was changing. A revolutionary technology became established which created with the artillery a whole new arm of service. The House of Habsburg simply prevailed, for the most part due to the fact that the canons were made of copper which, in Europe, was only available in Hungary, Tirol, Saxony and Bohemia. Hence, three of the four most productive deposits of that precious raw material were at the disposal of the House of Habsburg which had extended its technical advantage under Maximilian I at the latest and therefore possessed the best and most advanced artillery at the time. 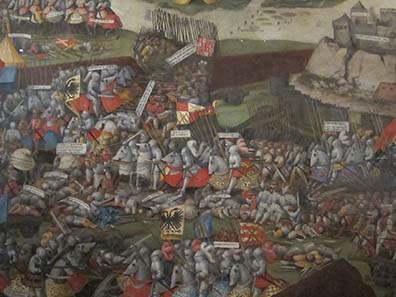 The Battle of Pavia. Painting by an anonymous master, probably from the southern Netherlands. The Ashmolean Museum / Oxford. Image: Ursula Kampmann.

That was to be confirmed near Pavia which was held by imperial troops consisting of German landsknechte with skilled artillery branches. Francis I continued to rely upon his Swiss who further refused to believe that the era of the pike square was inevitably over. With an army of 25,000 foot soldiers, 10,000 equestrians and – after all – 55 big guns Francis I personally moved closer to seize Pavia. On October 28, 1524, the siege began. The city was surrounded by an army which immediately blocked all supplies from the outside. Although there were only 5,000 German soldiers, reinforced by a garrison of 1,000 Spanish, these total 6,000 men ate a considerable amount of bread and meat each day and drank not an insignificant amount of wine.

One of the big military issues of the day was the fact that well into modern times the supply of an army was not centrally organized. Every landsknecht received the pay which he used to pay the sustenance for himself and his family. That’s right, his family, since a landsknecht was often followed by his wife and their children. The art of warfare was a profession like many others albeit riskier. No, we are not referring to death in battle. In the 16th century, it was easy to die, on numerous occasions. The risk was that the clients essentially hired an army bigger than they could afford. Hence, the soldier often lacked the pay. To him, that was inconvenient – for the inhabitants of the territory he was located in it was even more inconvenient. After all, with an armed man lacking the money he needed to buy the things he was in need of there was a good chance he simply took it with force. In a besieged city dependant on their garrison’s goodwill it was essential to supply the soldiers with money. If no regular money was available to pay the soldiers anymore then a kind of substitute money had to be created made of less expensive material which nevertheless was accepted in the city’s inns at full value. 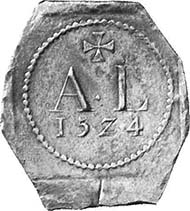 In Pavia, at the behest of the Spanish commander De Leyva, ducats and testone were minted that admittedly did not look as well and sophisticated as the pieces the soldiers were ordinarily given but which served their purpose all the same.
We know of two different obverse depictions of the siege coins minted during the siege of Pavia. For practical reasons, the reverse was simply left blank. A first one bore the legend A L for the commander which had ordered the minting, Antonio De Leyva, and the year of 1524 when the siege had begun. 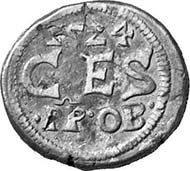 The second one displays the somewhat curious legend CES PP OB and the date. The abbreviation is usually read as Cesareis Papiae Obsessis – during the siege of imperial Pavia.

It does not take much time to get to the end of the story. An imperial army under Marchese Pescara relieved the city. The commander managed to circumvent the enemy’s left wing in the night from February 23 to 24. In the morning, the attack commenced, but at first the fortunes of war were not with the Spanish. They came under French artillery fire with absolutely no chance to escape. That was the moment when King Francis I sent his cuirass-bearing cavalry, he even went into battle on horse himself – thrilled by the possible victory -, right into the middle of things… and did not consider the repercussions: his cannoneers did not dare anymore to fire at the Spanish. After all, there was a distinct possibility that they might hit their own monarch. Marchese Pescara jumped at the chance, reinforced his shooters which had all the time in the world to finish one French cavalier after another off. After that, it was the infantry’s turn. George of Frundsberg with his 12,000 men proved successful. The Swiss batallion of the French which were stationed at the army’s left wing was too remote from the scenery to intervene in time. When moving closer, they immediately became trapped since the garrison of the city of Pavia had likewise left their fortress and contributed in empocketing the French army. It is said that 20,000 men were captured then including – and that was a windfall for Charles V – the French king himself.

Francis I spent months in Spanish prison before he was willing to make the political concessions Charles required. The contract was not worth the paper it was written on. After his return to France, Francis immediately cancelled everything. The Spanish victory of Pavia had no political ramifications.

For Italy, in contrast, the repercussions were desastrous. In spite of his victory, Charles V did not send any pays for his army to the effect that the soldiers lacked any money to make a living. Who is willing to endure hunger even though he is part of a powerful military force? Rumours circulated in the camp that there was a German monk referring to the Pope as the antichrist. Oh yes, in far away Rome the Pope and his cardinals lived in clover whereas the landsknechte who had fought for Emperor and Pope did not have anything to bite. Is it any wonder, then, that quickly a decision was taken to seize Rome? 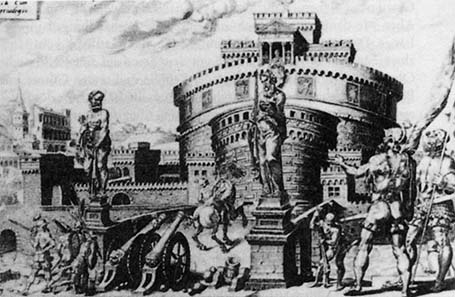 The Castel Sant’Angelo under siege, painted by Maarten van Heemskerck 1556.

Frundsberg, the commander of his body of soldiers, had to stay behind due to an illness. There was no chance for him anymore to appeal to his soldiers to seriously consider the Papal offer of 15,000 gulden – later, the Pope held out the prospect of an even bigger sum – and kept out of Rome. The imperial army did not believe the spiritual leader of the Christians anymore. On May 5, 1527, the siege of Rome began, and another day later the attack. The imperial soldiers did not encounter any significant resistance. An eye witness reported the following events: “In 1527, on May 6, we took Rome by storm, battered 6,000 men to death, plundered the entire city, took whatever we came across in every church, burned a major part of the city to the ground and marauded, torn and smashed every kind of copistry, registry, letters and archives.” 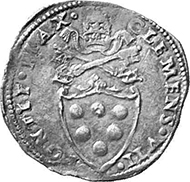 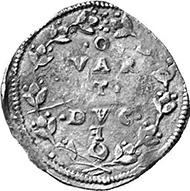 It is estimated that more than 10,000 people were killed in the Sack of Rome. The Pope lamented that during one week of siege the inhabitans of his city had lost goods worth roughly 10 million ducats. (Everyone who has ever read an insurance report specifying the treasures inside a now lost suitcase knows what to make of that.) Be that as it may, Rome was never to recover from the devastation it had suffered in the Sack of Rome.

To the annoyance of Charles V, as a matter of fact, who surely had not intended the destruction of Rome. After all, the thoroughly planned coronation in the Eternal City had fallen through completely. Charles had to resort to Bologna to be crowned – by the way, he was the last German Emperor ever to receive the imperial crown from the Pope’s hands.