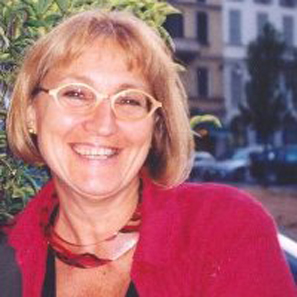 Lucia Travaini (*1953) completed her studies in Medieval Archaeology at the University La Sapienzia in Rome in 1976. Only later, when dealing with excavation finds, did she get involved in numismatics. First, Lucia Travaini worked in the archaeological preservation of historical monuments for the Soprintendenza Archeologica in Chieti (1979-80), then for the National Council for Cultural Goods in Rome (Segreteria del Consiglio Nazionale per i Beni Culturali), and finally for the coin cabinet of the Museo Nazionale Romano (until 1992).

Between 1992 and 1998, Lucia Travaini worked as a Research Associate and Senior Research Associate with Philip Grierson in Cambridge. Within the framework of their project, “Medieval European Coinage”, she played a major role in the publication of Volume 14 of the MEC book series, contributing the parts on the coinage of Lower Italy, Sicily, and Sardinia.

In 1998, Lucia Travaini became a Professor of Medieval and Modern Numismatics at the Institute for Classical and Ancient Studies (today the Historical Institute) at the University of Milan. Her field of expertise is medieval numismatics, especially with regard to Italian coins. One of her most widely-known and most important books, “Le zecche italiane fino all’Unità”, was published in 2011. The two-volume book treats the history of Italian mints until the founding of the modern Italian state. Lucia Travaini has also engaged in research on the imagery of money and written a book about portraits on medieval coins.

Next to numerous publications, Lucia Travaini regularly gives talks and has organised many congresses and research colloquiums. Most recently, she was involved in the organisation of the 15th International Numismatic Congress in Taormina (2015).

For her research, Lucia Travaini has received numerous awards, most recently the Prix Duchalais of the Académie des Inscriptions et Belles Lettres for the above mentioned work on Italian mints (2014). In 2012, the British Royal Numismatic Society awarded her with its annual medal.

The easiest and most comprehensive way to learn more about Lucia Travaini is on her own website (Italian only).

Her curriculum vitae is, however, also available in English.

She also has her own article on the Italian Wikipedia, which, however, is less detailed.

You can find lists of publications here and here.

And you can also email Ms Travaini.