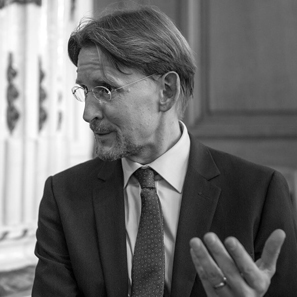 Strictly speaking, Andreas Urs Sommer (*1972) is Professor for Philosophy with a research focus on philosophy of culture at the University of Freiburg, internationally recognized expert on Nietzsche, and, since 2014, head of The Nietzsche Commentary of the Heidelberg Academy of Sciences. In this capacity, he was awarded several prizes for his research, including La lunette d’or of the Swiss Academy for Humanities and Social Sciences as well as the Friedrich Nietzsche Prize of the German Federal State of Saxony-Anhalt.

However, philosophy constitutes only one element of the academic research of Andreas Sommer. He is currently regarded one of the most distinguished collectors of Byzantine coins, having started this activity when he was still a schoolboy. Likewise as a pupil, he wrote his first scientific article for the Schweizer Münzblätter.

His list of publications currently* spans 71 pages, encompassing 85 articles and books on numismatic topics. German collectors know Andreas Sommer mainly through his publication on the coins of the Byzantine Empire that has replaced the English-speaking Sear as the standard work of reference in Germany.

Andreas Sommer has further dealt with the philosophy of collecting and is co-editor of “Die Hortung. Eine Philosophie des Sammelns”.

In 1992, Andreas Sommer was awarded the Eligius-Prize of the German Numismatic Society, and in 2007, he won the Vreneli-Prize of the World Money Fair.

Here you may download not only the detailed curriculum vitae of Andreas Sommer but also his list of publications consisting of 71 pages.

If you are interested to learn more about the philosopher Sommer, please watch this one-hour interview (in German) during which he also addresses coin collecting.

Here you can have a look in his book on Byzantine coinage (written in German).

Of course, he has his own Wikipedia entry: You may read it in German, in English or in French.

And of course you can write him an e-mail.