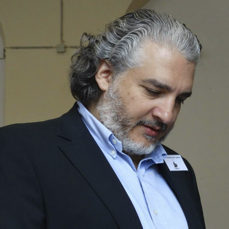 Doctor and coin collector, President of the Liège Numismatic Association

Sferrazza earns his living working as a doctor but, as the physician said himself, it is coins and the contact with coin collectors that keep him healthy.

The family coin collection gave Sferrazza a keener sense of his roots and heritage, which moved him to take various numismatic trips to Venice and France. Above all else, however, Sferrazza has devoted his time to his Italian homeland during ancient times, from the Greeks of Sicily right up to the Roman Emperors of the 3rd century.

In 1997, he joined the Liège Numismatic Association (Cercle Numismatique de Liège, C.N.L.), where he found a whole host of mentors to guide him over the years and decades: Jacques Bertrand, Michel Moreaux, Jean Marc Doyen, and Guy Gilson.

Since 2019, Sferrazza has served as President of the CNL and is a member of many other numismatic organizations and societies. In 2007, he was accepted into the Société Royale Numismatique de Belgique, and of course he is a member of the Società Numismatica Italiana.

His friendship with Michel Prieur meant that he forged links with the CGB auction house, links that are still strong to this day. He still writes for the CGB bulletin, and numerous other association journals, covering a range of numismatic and economic issues.

In 2014, Sferrazza created a Facebook page for his association, which he still manages today.

You can also reach him via his personal Facebook page.

If you want to get in touch with Agostino Sferrazza, you can send him an email.

There is a list of his publications on both the Royal Numismatic Society of Belgium website and Academia.