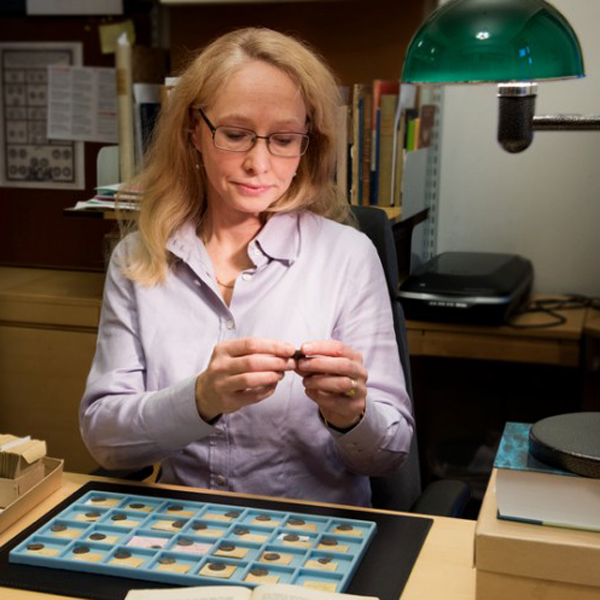 Cecilia von Heijne (* 1969) obtained her Doctor’s degree at the Stockholm Numismatic Institute of Stockholm University’s Archaeological Department in 2004. From 2008 to 2016, she conducted a postdoctoral project at The Royal Coin Cabinet – National Museum of Economy, Stockholm. She became Curator at this institution in 2004, and since 2012, she is Senior Curator.

In her research, Cecilia von Heijne focuses on medieval numismatics, especially the Viking Age (c. 800-1100 AD) and the 14th century. Her special interests also include exhibitions work and mediation questions.

Her publication list comprises not only numerous articles in national and international journals but also monographs. She is co-editor of “Monetary Boundaries in Transition – A North European Economic History and the Finnish War 1808-1809“ and “From Ephesos to Dalecarlia. Reflections on Body, Space and Time in Medieval and Early Modern Europe”. Since 2014, she is editor of the Nordic Numismatic Journal (Nordisk Numismatisk Arsskrift).

Cecilia von Heijne is a member of the International Numismatic Council (INC-CIN) since 2015, and editor of the Council’s website.

You can reach Cecilia von Heijne by email.

On the website of the INC-CIN, you can find her here.

Her CV can be downloaded here.

This is the homepage of the Stockholm Royal Coin Cabinet.

And here you can watch a video of Cecilia von Heijne giving a presentation at the Copenhagen 2015 DAMIN Round Table with the title “What can be learned about coin circulation from a total inventory of coin finds? Case study: Northeastern Skane c. 1600-1800”.