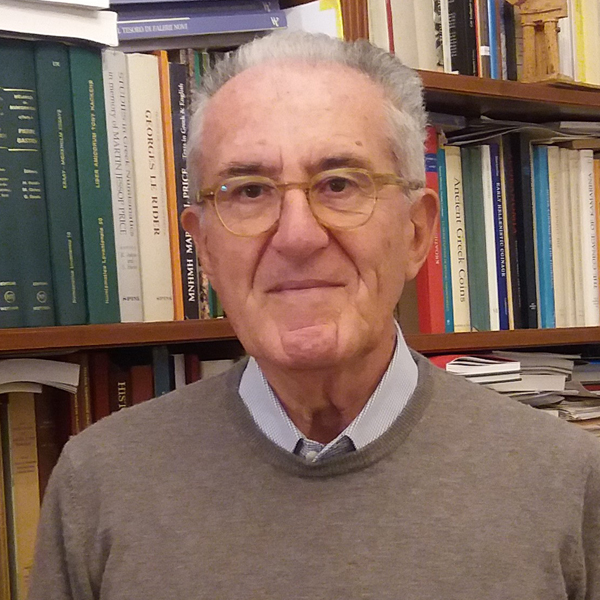 Giovanni Gorini (* 1941) had studied Archaeology and Numismatics at the University of Padua before he became keeper of the numismatic collections of the Museo Bottacin in Padua (1965-1978). From 1980 to 1991, he was editor of “Rivista Italiana di Numismatica” Milan. After being lecturer of Ancient Numismatics, he was full professor (starting in 1991) at the University of Padua until his retirement in 2011. He was and still is responsible for the Veneto Region Project of “Ritrovamenti monetali di età romana nel Veneto” for which 16 volumes have been released already.

As Visiting Scholar he attended the 1994 Summer Seminar at the American Numismatic Society in New York; additionally, he visited the State University Hongo in Tokyo in 1997, the Italian School of Archaeology at Athens in 1999, and the École des Hautes Etudes in Paris in 2001. He attended conferences and congresses all around the world.

Giovanni Gorini’s field of interest are the Greek coins in Magna Graecia with which he dealt in his “Monete incuse della Magna Grecia” (1975), and the Adriatic area with the coins of the Illyrian king Ballaeus. In 1973 he wrote the monograph “Catalogo delle Monete Romane Repubblicane del Museo Bottacin di Padova”. Celtic coinage of the North Eastern region of Italy constitutes the subject-matter of his 2005 book “Il ripostiglio di Enemonzo e la monetazione del Norico”, providing a new chronology for 2nd century BC Norican coins.

Other key interests of Giovanni Gorini are the medals of Giovanni Da Cavino, the Renaissance forger of Roman coins, and Charles Patin who lived and died in Padua in the 17th century.

Giovanni Gorini organized numismatic exhibitions for many Italian museums, including Rovereto (Trento) (1985), Aquileia (1997), the Palazzo Grassi in Venice (1996), and Padua (2001).

Giovanni Gorini is honorary member of the Sociéte Française de Numismatique and of the International Numismatic Council, and life member of the American Numismatic Society. He is also a member of the Galileian Academy in Padua and of the Pontifical Academy of Archaeology in Rome and of “Deputazione di Storia Patria” for the Veneto Region.

You can reach Giovanni Gorini via e-mail.

To view Giovanni Gorini’s profile at academia.edu and his many publications, please click here.

You can also find him on researchgate.

To have a look inside his 2016 festschrift, click here.