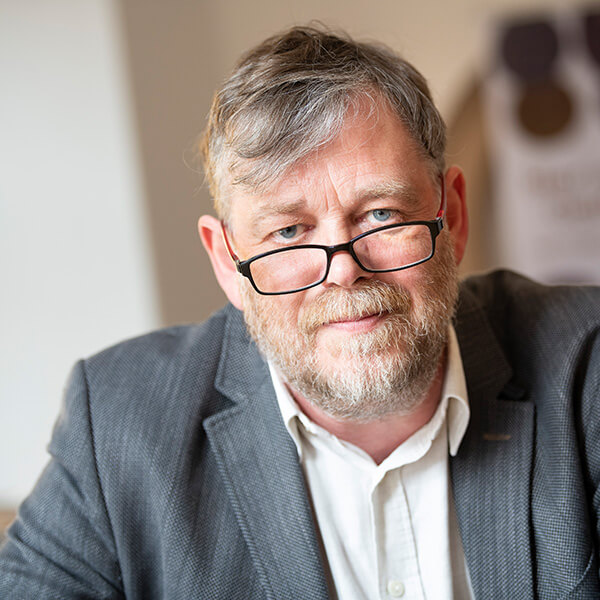 Head of the state coin cabinet of Saxony-Anhalt

After his apprenticeship as a photographer, Ulf Dräger (*1965) studied museology in Leipzig until 1988, then he began to work as a research assistant at the state coin cabinet in Halle. A few years later, the graduate museologist became head of this coin cabinet and has since then contributed to numismatics and regional history from numerous positions. Since 2010, Ulf Dräger has also been curator of the handicrafts and design collection of the art museum Moritzburg, which also houses the coin cabinet. Moreover, he was elected chairman of the Saxony-Anhalt Museum Association in 2018.

Dräger is an expert on medal art and regional numismatics. He published numerous works and essays on both subjects, for example on coins made of metals mined in the Harz (“Harzer Bergbaugepräge”), Luther medals and contemporary art medals. He is constantly promoting the International Art Medal Federation FIDEM and, since 1997, he has been appointed unregularly to juried competitions for commemorative coins. Ulf Dräger also contributed decisively to the digital coin platform KENOM. In addition to the exhibitions curated by him, he has regular lectureships at the University Halle-Wittenberg since 1991.

Ulf Dräger is the representative for Saxony-Anhalt in the numismatic commission of the German states (Numismatische Kommission der Länder). Since 2004, he has been chairman of the board of trustees of the commission’s Gitta-Kastner-Forschungsstiftung. From 2004 to 2019, he was vice-president of Germany’s numismatic association (Deutsche Numismatische Gesellschaft), and from 2004 to 2010 he was chairman of Germany’s association for medal art (Deutsche Gesellschaft für Medaillenkunst).

Further information on Ulf Dräger can be found (in German) on the website of the Numismatische Kommision der Länder.

There, you can also find a list of publications.

If the German language does not scare you off, you might be interested in this article published by the MDR on Ulf Dräger becoming chairman of the Saxony-Anhalt Museum Association.

Wikipedia has a German article about the state coin cabinet.

The website “museum-digital” offers further information (unfortunately, mostly in German) and digitalised pictures of the pieces of the state coin cabinet’s collection.

In June 2019, we published a German article about Halle’s purchase of parts of the Thormann Collection.