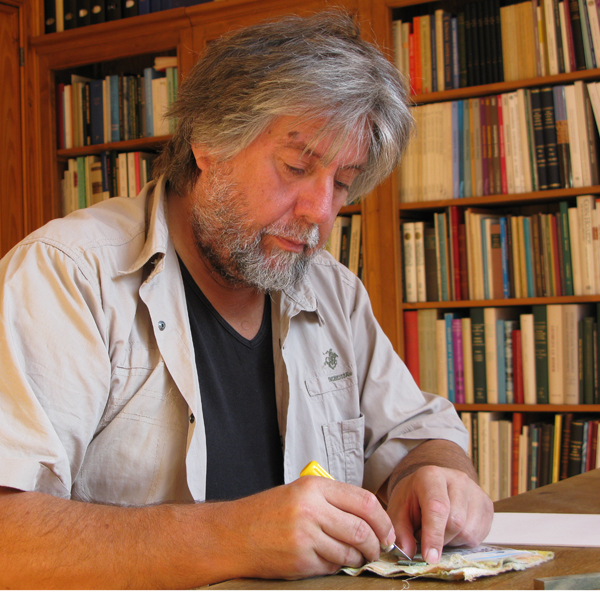 Archaeologist and numismatist, expert in Celtic and Roman imperial coinage

Jean-Marc Doyen (* 1954) studied art history and archaeology at the Free University of Brussels. He defended in 1989 his PhD-thesis, under the supervision of T. Hackens at the Catholic University of Louvain, on a numismatic and economic topic: “The Mint of Milan (259-268). Research on the chronology and monetary policy of the emperors Valerian and Gallienus (253-268)”. He received his habilitation in 2014 at the University of Nice Sophia Antipolis with “Structure and dynamics of money flows of the Remi. Modelizing of socio-economic indicators between 275/250 BC and 68 AD”.
Since 2015, Doyen is a permanent member of the HALMA laboratory (Histoire, Archéologie et Littérature des Mondes Anciens, Centre national de la recherche scientifique) at the University of Lille (France), where he is teaching and supervising PhDs in numismatics and archaeology.
In various monographs, Doyen has published coins from excavations, for example from Tell Abou Danné and Oumm el-Marra (Syria). In the 1980s, he published several volumes on the ancient coins in the museums of Charleville-Mézières. Doyen particularly focuses his research on the numismatic world of Gaul from the Celts to Late antiquity. For example, he dedicated a monograph to the socio-economic history of Reims during the Roman Empire (2007-2008). His extensive list of article publications and books demonstrates Doyen’s detailed knowledge which was the basis for his monographs.
Jean-Marc Doyen received several awards for his work: 1989, he won the Prix quinquennal de Numismatique du Cercle d’études numismatiques (Bruxelles), 1990, the Prix d’histoire romaine Jules Beccuci of the Catholic University of Louvain and 2010, the Prix Victor Tourneur of the Académie royale de Belgique.
In 1990, Jean-Marc Doyen was elected a full member of the Société royale de Numismatique de Belgique. From 2009 to 2014, he has been president of the Cercle d’études numismatiques – European Centre for Numismatic studies. Additionally, he co-edits various academic journals or he is a member of their scientific advisory boards, for instance as Chairman of the Board of the Journal of Archaeological Numismatics since 2010.

There is a profile of Jean-Marc Doyen on the website of the Académie royale de Belgique.

Moreover, there are numerous publications on his academia.edu profile.

Furthermore, he uploaded some publications on Cairn.