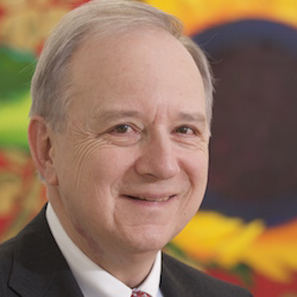 Founder and head of the MoneyMuseum, founder of the Sunflower Foundation

Dr Jürg Conzett (*1947) studied History and Psychology at the University of Zurich before he decided to make a career in finance. After his training at the School of Management at Stanford University / California, he worked as a financial analyst at the Citibank in New York and Tokyo between 1976 and 1980. Back in Zurich, he drafted the investment management policy as a member of the executive board, first at the Dow Banking Corporation in Zurich (1982-1986), then as Executive Director at the bank Cantrade, an affiliate of UBS. Since 1990, Jürg Conzett works as an independent financial consultant.

Jürg Conzett is a grand-son of the Zurich-born trade unionist and women’s rights campaigner Verena Conzett-Knecht. As her descendant, he feels an obligation to the general public. Therefore, his founding of the MoneyMuseum in May 1998 is an expression of his desire to make the broader public aware of the history of money. For this purpose, his coin collection, which he had incorporated into the foundation, went online in April 1999 under www.moneymuseum.com, as the first coin collection and one of the first museums ever. In June 1999, Jürg Conzett founded the Sunflower Foundation as the supporting trust of the MoneyMuseum.

The initial goal of the foundation has been enlarged considerably in the previous years, on the initiative of Jürg Conzett. Among others things, the Sunflower Foundation was involved in the introduction of the open source software Cyclos for Swiss barter clubs, or the development of the new branch of research: Monetary Theory. At present, the Sunflower Foundation funds the first research grant for Monetary Theory.

In the course of the MoneyMuseum’s reorganization, Jürg Conzett sold large parts of his collection through Numismatica Ars Classica, Künker, and Classical Numismatic Group. The permanent exhibition of the MoneyMuseum, Hadlaubstrasse, therefore consists mainly of the Wyprächtiger Collection, coins from the Roman Republic, and parts of the Kuhn Collection, premonetary forms of currency.

Please find the detailed history of the MoneyMuseum and the Sunflower Foundation here.

Jürg Conzett himself elaborates on the latest development of the Sunflower Foundation.

A large number of different forms of currency that were or still are exhibited in the MoneyMuseum can be found here.

Even though this website is modified at a more rapid pace than others – here you can find all productions of the MoneyMuseum in a constantly changing arrangement.

Here you can wirte an email to Jürg Conzett.