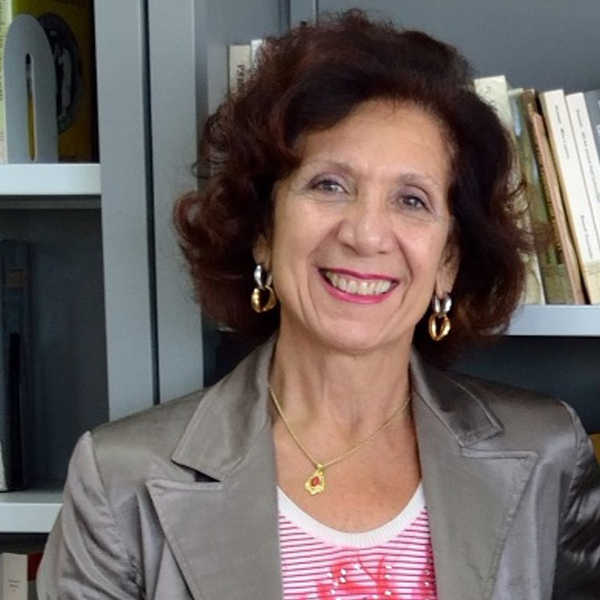 Maria Caccamo Caltabiano (*1946) is Full Professor of Greek and Roman Numismatics at the University of Messene and teacher of “Iconography and History of ancient Numismatics”. She is co-ordinator of the PhD Course in Archaeological and Historical Sciences and Director of the “Semata e Signa. Studi di Iconografia monetale” Collection. From 1998 to 2004, she has been Director of the Department of Classical Studies at the University of Messina.

Maria Caccamo Caltabiano investigates the iconography and the iconology of ancient coinage. She focuses particularly on Sicilian and Magna-Graecian coins, but also on Roman Republican and Provincial as well as Macedonian and Ptolemaic strikings. Her list of publications is extensive, including such works as “La monetazione di Messana. Con le emissioni di Rhegiondell’età della tirannide“ (AMuGS XIII, Berlin/New York 1993) for which she received the 13th International Prize for Numismatic Literature in 1994.

Maria Caccamo Caltabiano is promoter and coordinator of the LIN Project, regarding the publication of a “Lexicon Iconographicum Numismaticae Classicae et Mediae Aetatis”. She has been in charge of research projects and the international D.R.A.C.M.A. project (“Diffusion and Research on Ancient Coinage of the Mediterranean Area / Dialogue and Research among Athens, Cyprus, Messina and Agrigento”). She also cured the CD-Rom “The ancient Greek Coinage. Means of meeting and exchange between peoples, economies, cultures and religions in the Mediterranean area”. She forms part of the scholarly committee of the journals “Polis”, “Rivista italiana di Numismatica”, and “Il Maurolico“.

Maria Caccamo Caltabiano has organized several conferences and seminars, and she was President of the scientific and organizing Committee of the XVth International Numismatic Congress, held in Taormina in 2015.

She is a member of the Società Numismatica Italiana, the Accademia Italiana di Studi Numismatici, and the Accademia Peloritana dei Pericolanti. Maria Caccamo Caltabiano is currently Vice-President of the International Numismatic Council (INC-CIN).

You can reach Maria Caccamo Caltabiano by e-mail.

On the website of the INC-CIN, you can find her here.

Making many of her publications available for download, this is Maria Caccamo Caltabiano’s entry on academia.edu.

Her CV and a list of publications can be viewed here.

And a review of the Taormina 2015 International Numismatic Congress, organized by Maria Caccamo Caltabiano, was published in CoinsWeekly.