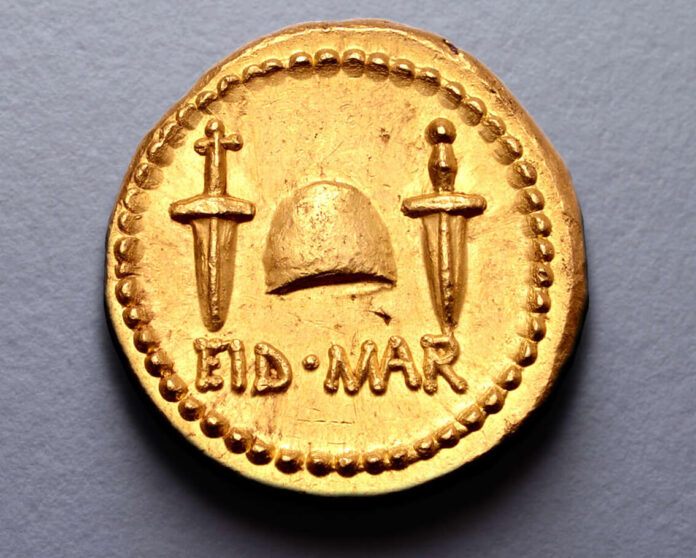 In 44 B.C. Julius Caesar was murdered in the Senate. Just before, by a special decree of the Senate, Caesar had been made dictator perpetuo – dictator in perpetuity – and granted the extraordinary and unprecedented honour of striking coins bearing his own likeness, thus breaking the ancient taboo of placing the image of a living Roman upon a coin. By these and other affronts to the traditional values and institutions of the Republic did Caesar seal his fate. On 15 March, 44 BC (the Ides of March), in a room adjoining the east portico of the Theatre of Pompey, Caesar was stabbed twenty three times by the gang of Senators numbering over thirty and perhaps as many as sixty, men that Caesar called his friends, and of whom many had been pardoned by him on the battlefield and now owed their ranks and offices to him.

After Caesar’s death the political situation became instable and precarious. Brutus, his former supporter and one of the instigators in late summer or autumn 42 B.C. coins in his military mint travelling with him in the East. Arguably no other type is more sought after by connoisseurs.

Herbert A. Cahn’s 1989 study entitled “Eidibus Martiis” noted 56 examples in silver and 2 in gold. Anecdotal comments have long suggested the extent of the surviving population of EID MAR denarii could approximate as many as a hundred specimens – a reasonably high figure for what is considered to be an extreme rarity – and Campana’s as yet unpublished “Die Study” indeed identifies 88 examples (at last count) in silver (of which at least 34 are now in institutional collections) and 3 in gold. On account of its enormous historical importance and enhanced by its virtual unobtainability to all but the most fortunate of collectors, this coin type like no other has inspired great admiration, fascination, disbelief and desire in the hearts of historians, numismatists and collectors.

While the other two specimens are being kept in museums, a third specimen has appeared recently. This aureus is being offered by Roma Numismatics on 29 October 2020 and is estimated at £500,000. The simple but bold reverse design employed by Brutus for this aureus contains the three principal elements of this ‘patriotic’ act of regicide committed to liberate the Republic from monarchical tyranny. Most striking are the two daggers of differing design, the one symbolising that wielded by Brutus himself, the other that of Cassius his co-consipirator. These flank the pileus, the cap of Liberty as worn by the divine twins and patrons of Roman armies Castor and Pollux, and which was conferred upon all freed slaves as a mark of their emancipation. The legend EID MAR is the abbreviation of EIDIBVS MARTIIS – the Ides of March. Thus, in an act of unparalleled braggadocio, we are at once presented with the murder weapons used to slay Caesar, the precise date of the deed, and the motive.

While the leaders of the Second Triumvirate Antony, Octavian and Lepidus embraced the practice of striking coins bearing their own images, the hypocrisy of Brutus placing his own portrait on the obverse of the EID MAR type cannot not have been lost on the Liberator. Both a betrayal of his personal devotion to the ancient traditions of the Republic, and an emulation of the tyrant he had slain, it may well be that he was convinced into allowing his image to be co-opted by the Republican party as a rallying symbol for the swiftly approaching engagement between their legions and those Antony and Octavian. As a descendant of Lucius Junius Brutus, the founder and first consul of the Roman Republic, who in 509 BC had sworn on a bloody dagger to overthrow the unjust rule of the Tarquin kings, the clearly drawn parallels must have been heady propaganda to the Republican cause.

It must seem most amazing that a third aureus has appeared. Previously only two specimens had been known: one is on long-term loan to the British Museum, the other in the Deutsche Bundesbank collection.

This third specimen comes frome the collection of the Baron Dominique de Chambrier. Previously it belonged to the collection of Bernard de Chambrier (1878-1963) and Marie Alvine Irma von Bonstetten (1893-1968). Marie Alvine Irma von Bonstetten was daughter of Gustave August Arthur Albert von Bonstetten (1864-1935), the founder of the ‘Automobile Club Suisse’ in 1898, and great-niece of Gustave Charles Ferdinand von Bonstetten (1816-1892), who was a distinguished antiquarian and collector who published many articles in the Recueil d’antiquités suisses (1855, 1860 and 1867) and L’Essai sur les dolmens (Geneva, 1865), an authoritative study on European dolmens erected between the 5th millennium BC and the end of the 3rd millennium BC.

In 1841 he was awarded the title of chamberlain by Ferdinand I, Emperor of Austria. Later, Gustave Charles Ferdinand von Bonstetten worked as an independent researcher and carried out archaeological excavations in both Switzerland and France. In 1873 he donated a part of his important collection to the ‘Antiquarium of Bern’ and his collection formed the basis of the Bernisches Historisches Museum. The Musée Romain of Avenches also owns pieces from his collection. The Eid Mar aureus offered by Roma Numismatics is provening from the collection of the Baron Gustave Charles Ferdinand von Bonstetten.

You can find the aureus in the Roma Numismatics online catalogue.

We reported in 2010, when the British Museum received the aureus as a permanent loan.

In this article you can read more on the historical background of Caesar’s assassination.

And also in this episode of “Human Faces”.

September, 5. 2019
The public auction features 1,367 coins and medals from distinguished collections like Hermann Lanz, and Dr. Nicholas Lowe. One of the many highlights is an Umayyad gold dinar dated AH 77 said to be the most desirable Islamic coin estimated at £125,000.
error: