June 27, 2013 – As I mentioned before, it’s a classic excursion: Priene, Miletus, Didyma. We presented Miletus and Didyma in the last chapter. The next day, we headed to Priene.

Tuesday April 30, 2013
Now naturally we didn’t visit Priene before midday, since, as I mentioned in the last chapter, organizers follow a fixed formula in designing their itineraries: “Priene, Miletus, Didyma”  means that Priene is overrun in the mornings, but wonderfully peaceful later in the day.

We spent the morning in Kusadasi. Thousands of tourists stay here for weeks at a time. We figured, we would be able to find something to keep us busy for at least half a day. There’s no museum. Instead, there’s a factory outlet – which isn’t surprising either, since Kusadasi doesn’t have an ancient predecessor. Meanwhile, it’s become so large, that it has overgrown the ruins of a couple of Greek cities; a port city called Neapolis and a little town by the name of Phygela are now associated with Kusadasi. But its roots only date back to the 13th century, when a new port (Scala nova) was established in order to intensify Venetian and Genoese trade with Asia Minor. 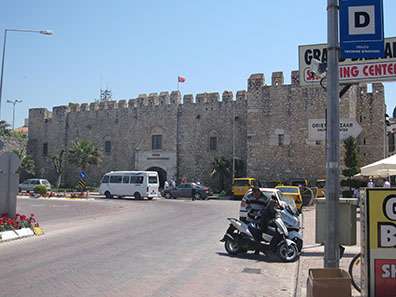 The Caravanserei of Kusadasi. Photo: KW.

In 1413, the Ottomans conquered the harbour. They surrounded the city with a wall and built the Caravanserei, which now forms the city’s tourist centre. In the 19th century, Kusadasi lost its significance as a trading port. It faded into obscurity, until the 70s, when tourists began to discover the romantic bay. Pioneering the development, by the way, was Hümeyra Sultan, founder of the Hotel Kismet where we had stayed. (see chapter 7). She fell in love with the place in the 60s. High society hobnobbed and socialized in her luxury hotel. Then came the individual tourists, then the tour groups, and now Kusadasi is a typical shopping mall for tourist junk. People speak German – and English – and Russian – and are very annoyed if you try to order something as simple as tea in Turkish.
It took us half an hour to walk from the hotel to the city centre. After 20 minutes we fled from aggressive carpet and leather jacket sellers. And then we’d had enough. We took a seat at the sea front so we could watch the area where cruise ships dock. 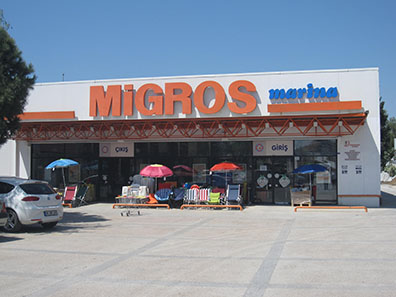 We ate little, overpriced meat kebabs that actually made us hungrier than we’d been before. So we decided on a romantic lunch on the balcony, and went shopping for it in the local Migros. Yes, you read that correctly. Migros, just like in Switzerland.
In 1954, the Migros cooperative founded a subsidiary, Migros Turk. At the time, Turkish politicians saw this as a solution to a major problem: the population was growing, and the country’s own agricultural capacity could not guarantee an adequate supply of basic foodstuffs at reasonable prices. And so, from 1954, Migros trucks brought food to remote areas according to a specific schedule. Self-service stores were built later. Meanwhile, the former subsidiary is now independent and, with a current total of 687 branches, the biggest supermarket chain in Turkey.
If you’d like to know more about the Migros concept, you should read this article in CoinsWeekly.
We treated ourselves to olives, sheep’s milk cheese, bread, yogurt, tomatoes, and whatever else we wanted. And it wasn’t until late afternoon that we left the house again to drive to Priene, visible from afar perched on an impressive rock.

Have you ever wondered why, of all things, a city on a mountain puts the attribute of the god Poseidon on their coins? Well, the explanation is simple: To begin with, Priene actually had a harbour – it was on the coast of the mountainous peninsula of Mycale. Today, there’s alluvial land where the sea once was. And part of the city region at the time was the Panionion, at the time, the centre of the Ionian Cities and Towns Association dedicated to Poseidon.
When exactly (and also where) the city was founded, is still unknown. Archaeological finds are yet to be successfully linked with the ancient Priene.
One of the Seven Sages, Bias of Priene, lived in this city. He’s said to have been one of the leading figures in Ionia around 550. His (not historical) advice to the Persian-conquered Ionians has become famous: Instead of fighting, they should found a new, joint city in Sardinia. Let’s hope that Bias was a bit more realistic when it came to his profession. He was considered a brilliant lawyer who became proverbial. In antiquity, a good plea was described with the words “He spoke better before the courts than Bias of Priene.”
The following wisdoms are said to have come out of his mouth:
-Most people are wicked.
-Do not speak fast, for that shows folly.
-Do not praise an undeserving man because of his riches. 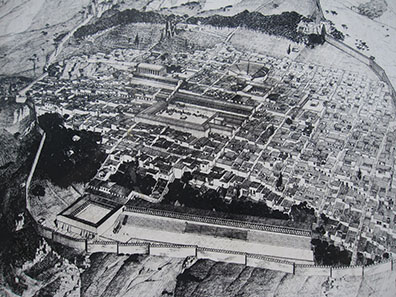 City map on an explanatory board. Photo: KW.

Despite all the political wisdom, Priene took part in the unsuccessful Ionian Revolt. It was conquered by the Persians and pillaged. This spelled the end of the economic boom, since, as a member of the Delian League, it only paid its membership dues sporadically. Sometime during the 4th century, the inhabitants of Priene left their old settlement and set up their new city on the site we can visit today.

This resettlement tends to be linked with Mausolus, the Dynast of Caria. In 377/6, he succeeded his father Hecatomnus as Satrap. The Persian central power was waning at this time, and so he was able to act relatively autonomously. Probably in an attempt to strengthen the economic clout of his territory, he initiated the relocation of several once important cities, including Cnidus, Erythrae, and Priene.

Construction had barely begun when Alexander conquered Asia Minor. He made the building up of Priene, which had been so hard-hit by the Persians, a top priority and personally paid for the temple for Athena.

We already know what happened then. First, Priene was Seleucid, then it came under the sphere of influence of Pergamum, and following the death of Attalus III, the city became part of the Province of Asia. In the 5th century, Priene was a bishop’s see. Around the year 1300, the Turks conquered the region. They moved to the lowlands, so that Priene was fully abandoned when travellers in the 17th century declared the impressive ruined city a “must” of every tour of Asia Minor. 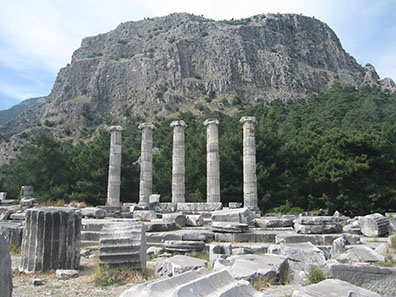 The famous view of the Temple of Athena. Photo: KW.

We know quite a lot about this structure – not because the dedicatory inscription of Alexander the Great has been preserved, but because Vitruvius has passed down to us that the architect responsible was Pythios of Priene. Pythios wrote architectural commentaries that are twice cited by Vitruvius, and is also said to have played a contributing role in the Mausoleum of Mausolus. 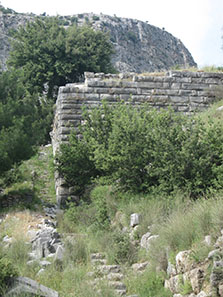 The different levels were connected via staircases. Photo: KW.

We went down a relatively steep set of stairs to the Agora. 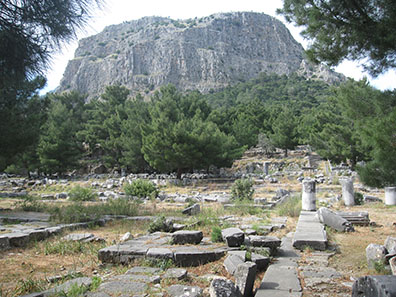 As a centre of trade and administration, it forms the geographical centre of the city. 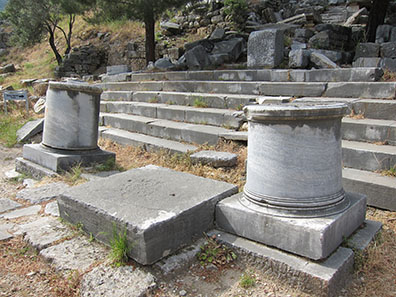 View of a portion of the sacred hall. Photo: KW.

The so-called sacred hall bordered the Agora to the north. It was financed through the funds of the Cappadocian Kings. Orophernes, who waged a war against his brother Ariarathes V, had deposited 400 talents of silver in the Athena Temple – as you know, temples served as banks in antiquity. But as is the way with dictators’ funds: As soon as Ariarathes V was sitting comfortably in his saddle, he demanded that Priene return the 400 talents. The city refused at first, but Ariarathes advanced with an army. He plundered the surrounding area and laid siege to the city, which turned to the Romans for help. They negotiated a compromise –Ariarathes got the money back, and Priene was spared from conquest. And the endowment of the sacred hall may well fall into this context, by which good relations were restored between the King and the city. 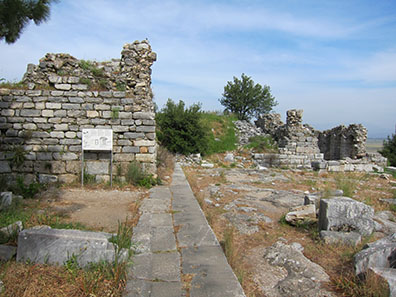 To the east of the Agora is a Temple of Asclepius, which was formerly attributed to Zeus. A Byzantine fort was built here in the 13th century to serve as protection from the Ottomans. 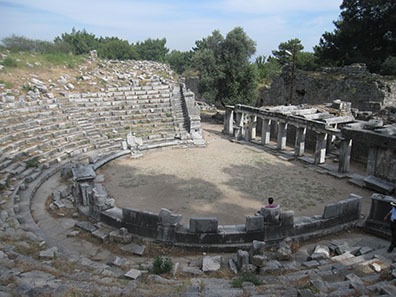 Once again, we visited a theatre. They seem to be abundant. They all look the same and are distinguished mainly by the number of visitors they can hold. This one could hold an audience of about 6,500, so pretty much all of the city’s inhabitants. 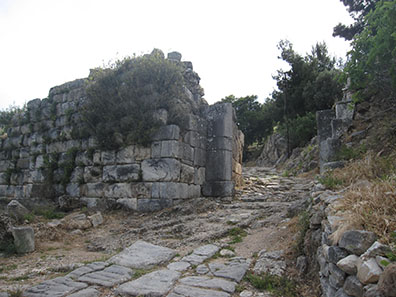 Standing out against the light was the city gate, which had offered an entrance along the 2.5 km long city wall into the centre of the city. The wall was 6 metres high and about 2 metres thick, and with its 16 towers, encompassed an urban area of an impressive 37 hectares. Of this area, only half of it was cultivated or even suitable for cultivating. The rest served to protect the population in the surrounding areas and their livestock in the event of war.

The next chapter takes us one step further – we stay in Pamukkale and make an excursion from there to Aphrodisias. Join us as we witness just how effective the German ADAC (Germany Automobile Association) can be, even in the farthest reaches of Turkey…

You can find all parts of the series ‘Springtime in Turkey’ here.