May 16, 2013 – Everyone knows Troy! But have you ever been to Alexandria Troas, the most important port in northwest Asian Minor? Join us in this chapter as we venture into this forgotten metropolis and to the equally little-known temple of Apollo Smintheus.

Wednesday April 24, 2013
After our Cyzician experiences, we had pretty much had it with the small, unknown excavations that were indicated by a mere three dots on the road map. Nevertheless, the temple of Apollo Smintheus intrigued me.

Ages ago, on a simple, but extremely well preserved bronze coin from Alexandria Troas, I had discovered a small mouse next to the feet of Apollo Smintheus. Now, of course, I was curious. ‘The Mouse Slayer’ or ‘Mouse devourer’ … what a wonderful epithet for a god! So, it seems only logical that I’d want to see his temple for myself one day.
And according to a locally bought guide, Alexandria Troas was supposed to be very close by, near Dalyan. Surely, it would be easy to find! Or, so we thought when we set out from Assos. After a good half hour of fruitless driving around the chosen destination, however, we weren’t so sure anymore. The Turkish think signs are for sissies. Which is not to say there aren’t any – there were some in Assos, 40 kilometres away, and in Troy, 25 km away. And so, there was only one way to find what we were looking for and that was to keep driving in ever-larger concentric circles around the centre until we ended up, completely unexpectedly, right in front of the excavation. 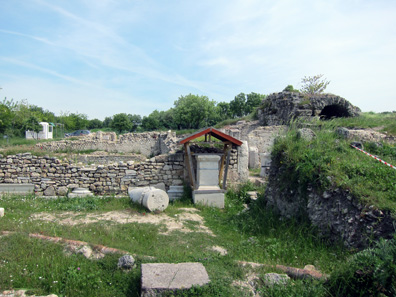 A look at the thermae of Alexandria Troas. Photo: KW.

We were warmly welcomed! A lone Turkish man was waiting for all the passing tourists – and there couldn’t be many, considering the scarcity of signs to lead you there. In any case, he was so enthusiastic in his greeting that his complete lack of command of any other foreign language didn’t matter at all. 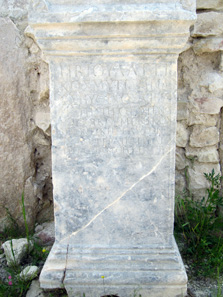 Ismail Hakki Tunçer showed us more details of the excavation of Alexandria than we could ever have discovered on our own. He opened all the gates so that were also able to see the treasures in the closed sheds. He told us excitedly that he knew the epigraphist Elmar Schwertheim, and even showed us his business card. (Dear Mr. Schwertheim, should you ever read this, I wanted to make sure to tell you that you have an extremely loyal fan in Alexandria Troas!)

It was Antigonus Monophtalmus who, around the year 306 BC, founded a city by the name of Antigonia on the site where a small place called Sigeia had once stood. Antigonus had big plans. The location was ideal to establish a new port city. And so, the inhabitants of Neandreia, Larissa, Hamaxitos, Cebren and Scepsis really had no other choice but to leave their old home and let themselves be settled by Antigonus in his new city. Quite understandably, they didn’t show all that much loyalty to their ruler. They wouldn’t have been too bothered by the fact that in 301 BC, Lysimachus took over the city and renamed it Alexandria, in memory of Alexander III.

In 281, so after the Battle of Kurupedion, Alexandria fell to the Seleucids, who even minted coins there from time to time, more specifically, under Antiochus Hierax. During the civil war against his brother, he retreated to Asia Minor, from whence he is also said to have been driven out by Attalus I of Pergamum.

And with that, Alexandria became Pergamenian and later, Roman, as per the will of Attalus III. In its heyday, the port is said to have had more than 100,000 inhabitants. According to modern estimates, the city spanned more than 400 hectares.

Under Augustus, a Roman colony called Colonia Alexandria Troas was created. This is why the city’s coins from the Roman Imperial Era carry Latin lettering. It was from here that Paul sailed to Europe for the first time, perhaps what led to the establishment of a bishop’s see that is still occupied by the orthodox church as a titular see. Nevertheless, in the 14th century the city was more or less run down, making it an optimal quarry for the Ottoman rulers to plunder when it came time to build and outfit a mosque. 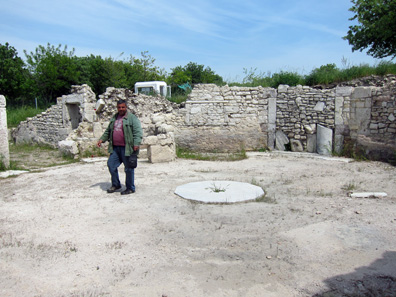 Mr. Tunçer tells us about the Roman bath. Photo: KW.

The remains of Alexandria Troas may not be all that spectacular, but they’re still interesting. There’s also a large bath complex there that was built by Herodes Atticus. 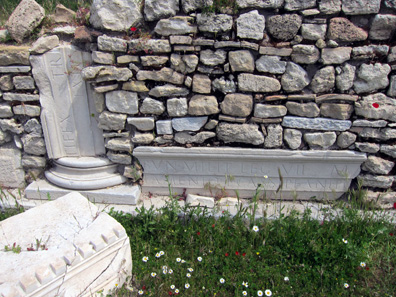 Inscriptions wherever you look. Photo: KW.

And was it here that the team from the German Archaeological Institute found the important inscriptions? In three imperial rescripts, Hadrian set out which cash prizes were to be announced for winners and which sanctions were to be levied for infringements. Whatever the case may be, when you visit the excavation, you come upon a whole host of inscriptions. 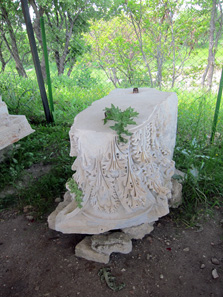 Treasures in the depot: A column capital with acanthus decoration, with a real acanthus leaf upon it. Photo: KW.

It was also interesting to have a look into the depot, which held well-preserved architectural elements, such as various acanthus capitals. Using real acanthus leaves, Mr. Tunçer demonstrated for us just how close this form of decoration is to the real thing. 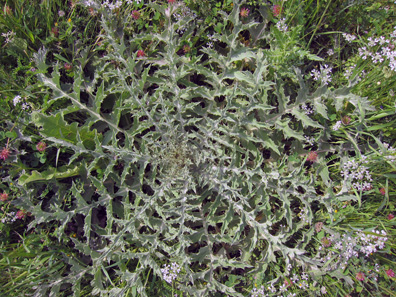 Acanthus is a plant family that is widespread in the Mediterranean and features lobed or serrated, usually quite spiky leaves. 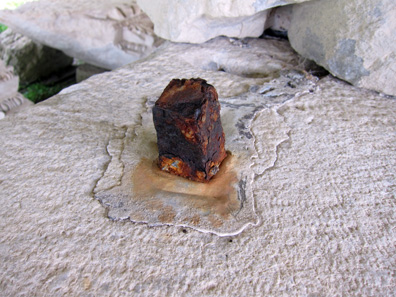 Connection between the parts of the columns. Photo: KW.

Also preserved on some capitals was the iron pin that once held the various column drums together, cast firmly with lead. 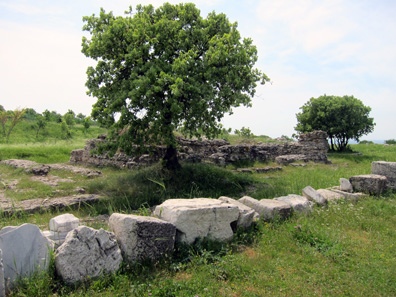 You can also see a Roman temple that was likely built under the reign of Augustus. 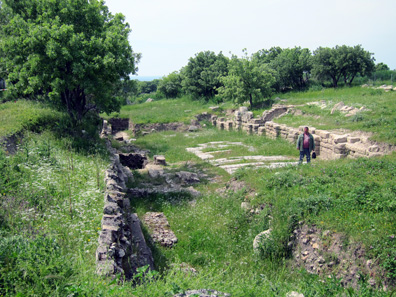 Particularly impressive is an excavated portion of road where you can quite clearly identify the small shops that lined one side of the street. 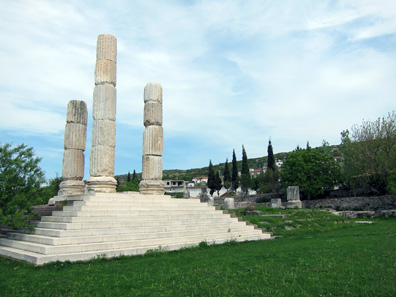 Just a few kilometres away is the temple of Apollo Smintheus, and compared to Alexandria Troas, it’s very well signed. Here, everything lies in wait for a big influx of visitors – three columns have been re-erected (as best as they can be), offering a nice photo opportunity; there’s a little ticket booth where you buy the entrance ticket; and next to it there’s a little cafe. There are even signs pointing the way to the toilet, an unmistakable sight of imminent mass tourism. 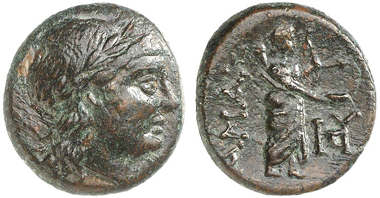 Mind you, most visitors will probably first need an explanation as to the special God who lived here. The new founding of Alexandria Troas assumed this God from his previous communities. In the 4th century BC, Hamaxitos had been Smintheus’ hometown – and proudly so, since it was thus able to associate itself with the Iliad.

At the beginning of the Iliad, the Trojan priest of Apollo, Chrysus, appealed to the God as the Sminthian because Agamemnon had stolen his daughter, Chryseis, and would not return her. As we all know, Apollo sent a plague as punishment, a disease that even in antiquity had been associated with small, household rodents. As father of disease, Apollo is also always depicted with bow and arrow in his form as Smintheus.

Other writers didn’t find this explanation of the invocation of ‘Smintheus’ in the Iliad all that plausible. At any rate, commentators have been trying to come up with conclusive solutions since the middle of the 7th century. One such attempt came from an Ephesian poet named Callinus, who invented a myth according to which Apollo gave an oracle to Trojan Cretans, which commanded them to stay wherever the ‘earth-born’ would attack them. In the area of Hamaxitos, they came upon mice, and therefore, as sender of the mice, Apollo would be the Smintheus. 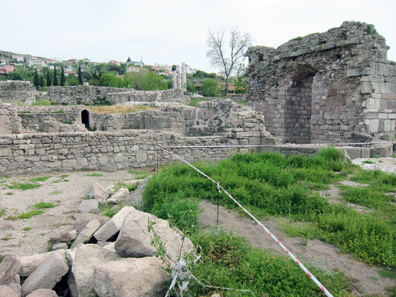 Sacred area of the God with a view of the temple. Photo: KW.

This poetic version gained acceptance, such that the sculptor Scopas of Paros, who is described by Strabo as having created the statue of Apollo Smintheus, put a little mouse as an attribute next to the foot. 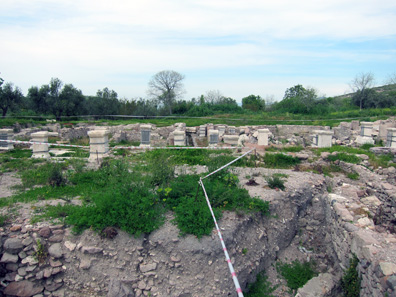 The Smintheon is currently being excavated by Turkish archaeologists. They were able to determine that the temple currently visible today was built between 150 and 125 BC.
At first glance, the cladding of all the inscriptions, which were visible in large quantities on either side of the processional way, seemed a bit strange … 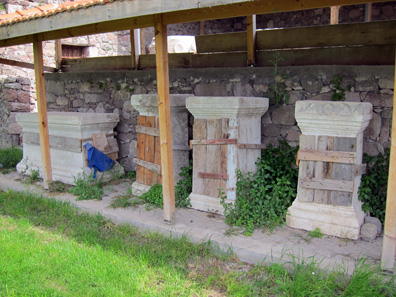 These nailings couldn’t have been intended as protection from inclement weather, since they also covered inscriptions, which, under a roof, were far better protected than many inscriptions that we’d seen on other excavations or in open-air museums. Finally, I hit upon the suspicion that the covering was there to prevent ‘enemy’ scientists from any premature publication. Honi soit qui mal y pense. 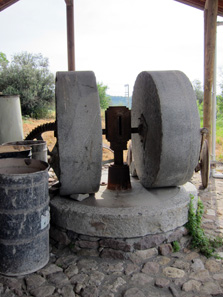 Reconstruction of a mill. Photo: KW.

Although not obvious to the excavation, there was also a very interesting reconstruction of an old mill … 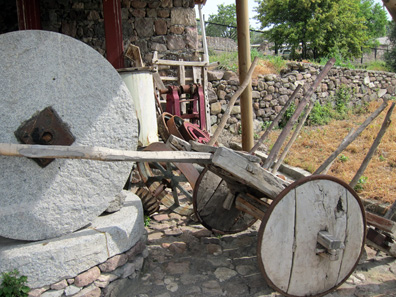 Reconstruction of a cart with disc wheels. Photo: KW.

… and of an archaic cart with disc wheels. 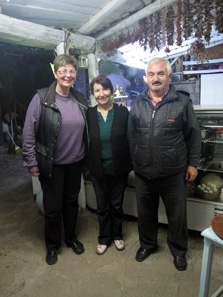 And with that, our time in the Troas had finally come to an end. We went to eat one last time at Dr. No Kofta. Have I already gone on about the heart-warming kindness and friendliness with which we were met at this restaurant? When we went there on the second night, Mrs. Yilmaz’s whole face lit up. On the third day, she shook our hands. And on the fourth and fifth day, she hugged us like old friends. Or, rather, she hugged me. Her husband hugged Kurt. And then, as a farewell, they packed us a bag full of apples.

I’m still amazed by the warmth with which Turkish hosts greet their (paying) guests, and it’s definitely more out of Homeric spirit than them simply looking for a tip. Time and again, I was ashamed whenever I thought of the way we treat foreigners here. We could certainly learn a lot from the Turks when it comes to hospitality.

Join us in our next quarters, the incomparable Phocaea – incomparable not because of its coinage or even its ruins, but rather because of the unique breakfast at the Hotel Erguvan. What’s more, next week we’ll also be visiting the city of Pergamum.

All parts of the series ‘Springtime in Turkey’ can be found here.