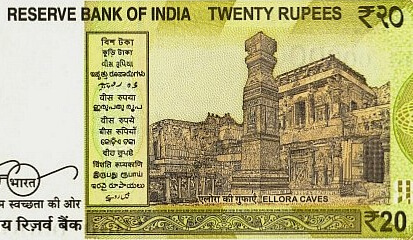 The Reserve Bank of India (RBI) have announced they will shortly issue the new 20 Rupee denomination banknotes (US$ 0.29) which will be part of the current and second Mahatma Gandhi series that was first begun in 2017. This particular denomination includes the signature of Shri Shaktikanta Das, 25th Governor of Reserve Bank of India who was appointed on the 11th December 2018. The 20 Rupee banknote denomination has been in general circulation since 1972 and this latest release represents the fourth version and second to portray the Mahatma.

The country was thrown into economic turmoil when in November 2016, the previous series 500 and 1,000 rupee banknotes were declared invalid by the administration of Narendra Modi after a specific date of exchange. The move was greatly criticised for its lack of forward planning, but was intended to bring to the surface what was believed to be trillions of rupees in the economy which were not declared as income or were earned in the black market. Banks were instructed to accept the soon-to-be invalidated 500 and 1000 rupees issued as part of the first “Mahatma” series in order to offer credit to their customers.

The Reserve Bank then introduced the country’s highest banknote value which was a 2000 rupees denomination. This escalated the chaos as there were few banknotes in circulation to make change for purchases below 2000 rupees. A 500 rupee denomination followed sometime after but the lack of smaller notes compelled many street vendors and small businesses to resort to an electric form of payment. Over the next two years and up to the issue of the new 20 Rupee note, the second Mahatma series was joined by 10, 50, 100 and 200 rupee denominations.

The new note which is described as green-yellow in colour features a portrait of the Mahatma Gandhi whose image was first introduced onto Indian bank notes from 1996. The second “Mahatma” series also includes the symbol for the Indian rupee, after the numeral denoting their face value which the Reserve Bank introduced to the Indian public in July 2012.

The new note depicts the Mahatma on the face or obverse, with his portrait is now positioned towards the centre and facing right. To the left of the portrait is the Devanagari rupee symbol and numeral. To the right of the portrait are the note’s watermark field and the name of the authority, along with the seal of the Reserve Bank of India and the denomination of 20 Rupee. There is also a segmented windowed, de-metalised security thread with inscriptions and RBI seen vertically. The state emblem of the Ashoka is placed to the right edge of the note. The serial numbers, which graduate from smaller to larger sizes, are positioned to the upper left and lower right of the note on the face.

The theme of the second Mahatma series focuses on the country’s cultural heritage and as such, the 20 Rupee denomination features a motif of the Ellora Caves on the reverse. It is a UNESCO World Heritage Site located in the Aurangabad district of Maharashtra, India, featuring Buddhist, Hindu and Jain monuments, and artwork, dating from the 600-1000 CE period. The year of issue “2019” is included to the left of the field of the watermark, and an image of the Mahatma’s emblematic spectacles is seen below the watermark field together with wording in Devanagari. To the right of the watermark, a panel of text is included which shows the note’s denomination in several different official languages prevalent in India. On the four corners shown on both sides are geometric patterns aligning with the overall colour scheme.
The Reserve Bank of India has advised that all 20 rupee banknotes issued in the previous series will continue to be legal tender and co-circulate with the new versions once they are released into circulation until further notice.
For additional information on this and all other banknotes in the new “Mahatma” series and coins issued from the RBI, please visit their website.

More on Shri Shaktikanta Das can be found in this Financial Express article.

You can find images of all other banknotes issued as part of this second Mahatma Ghandi series on Wikipedia.

Collectors of Indian banknotes can get more information in the The Revised Standard Reference Guide to Indian Paper Money.

March, 7. 2019
The National Bank of Rwanda has issued two new denominations as part of new series of banknotes. They seek to highlight Rwanda’s lucrative tourist industry and the cultural diversity of this Central African nation.
error: