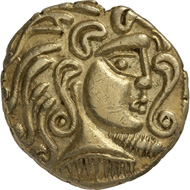 With the kind permission of the MoneyMuseum, Zurich. 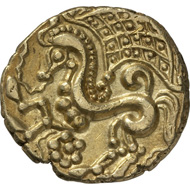 Parisii (Celtic tribe in France, in the region of present-day Paris). Gold stater, End of the 2nd century BC. © MoneyMuseum, Zurich.

At first glance, the two don’t appear to have that much in common – the coin featuring the countenance of the God Apollo on the obverse that we talked about in the last chapter, and this gold stater of the Parisii, minted more than a century later. And yet, the sweeping coin face design of the Celts, reminiscent of an abstract work of art, developed out of the type of staters that were introduced by Philip II. 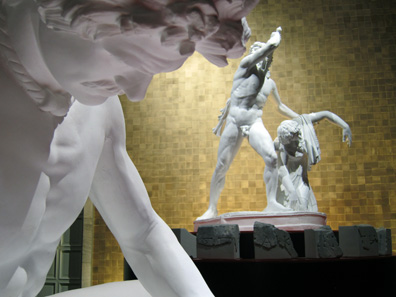 The Celts didn’t always fight on the side of the Greeks. Notable were the Galatians, who settled in Asia Minor and were conquered by Attalus I. Here, statues from the Victory Monument. Berlin, Pergamum Museum. Photo: KW.

The Celts became acquainted with the coins through their service as mercenary soldiers. They were known as capable, tenacious and tough fighters who got great pleasure from battle. As such, it was a good deal for both sides when Philip II or Alexander the Great or one of their successors hired a contingent of these trained fighters. Long gone were the days when a Greek army consisted of the draft of city citizens fit to bear arms. Specialization had set in with regards to soldiering work, and thus many Celts found their livelihoods in Greek service.
They also carried – provided they survived the expedition, of course – their wages wherever they made their homes, along with the knowledge of the coin. And it wasn’t long before they started their own minting.

We don’t know a great deal about it. We can’t say with absolute certainty whether particular tribes were responsible for specific pieces or whether private individuals, for reasons unbeknownst to us, had their gold turned into coins. Our piece is attributed to the Parisii tribe, since the majority of known specimens were discovered in the area where the Parisii lived during the time of Caesar. Moreover, it’s a nice notion to think that an art centre like Paris could also have produced one of the most significant masterpieces of Celtic numismatics more than 2,000 years ago.

We don’t know, for instance, what exactly the engraver was thinking while creating it when he decided to rearrange the neat hairstyle of the Greek god into a wild head of curls, or why, in a sort of horror vacui, he opted to fill in every bit of face design surface with decorative elements. There is, of course, any number of hypotheses floating around.
And so we’re left with no other option but to regard this coin as a work of art, one whose message is no longer known to us but whose beauty still speaks volumes even after more than 2,000 years.

In the next chapter you’ll learn about the currency in which Judas sold Jesus.