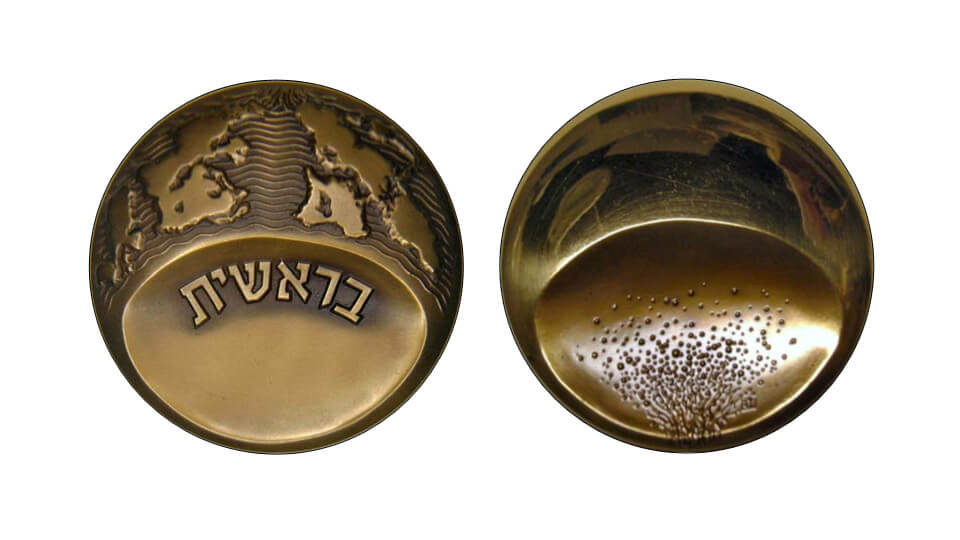 [bsa_pro_ad_space id=4]
The Most Beautiful: Judaic Medals Selected by Mel Wacks
1 of 10

For the past five decades it has been my pleasure to coordinate the production of over 50 medals for the Jewish-American Hall of Fame. I have worked closely with the medalists to create commemoratives of historical significance and of the highest artistry. I am also on the board of the American Medallic Sculpture Association, and chair the committee that chooses the American Medal of the Year. So I am thinking often about medal designs. But, I have never before thought about my favorites – so here it goes (in chronological order).

As I had to give some more details on the last medal that could not be included in the caption, more more about it here:

Within the Star of David’s six points are the Citadel (Tower of David) in Jerusalem, the ancient city of Akko, Petra of Jordan, the St. Catherine’s monastery in the Sinai Peninsula, and Old Jaffa. In the center, behind the cross, there is an inscription over the Western Wall: “HOW GOOD AND PLEASANT IT IS WHEN BROTHERS DWELL IN UNITY. PS. 133:1” The ceiling of the Dome of the Rock in Jerusalem, in the center of the reverse, is surrounded by arches containing six representative religious buildings in the holy land: the dome of the Church of the Holy Sepulcher, the Church of St Mary Magdalene, the Dome of the Rock, the Baha’i Shrine and Gardens in Haifa, the Dormition Abbey, and the Ramban Synagogue near the Hurva Square. Around the rim is the inscription “Jerusalem and the Holy Land” in Hebrew and Arabia, and the outstretched wings of doves of peace. These will be issued in 2021 in bronze (2.6” and 6.1”) and copper-nickel (3.5”). You can view a 3-D computer mock-up online.

Founding the Jewish-American Hall of Fame in 1969, Mel Wacks also started what today is probably the longest-running series of art medals in the world, but certainly in the USA, as our record article states.

This is the Jewish-American Hall of Fame.

You can contact Mel Wacks via e-mail if you have questions on Judaic-themed medals.